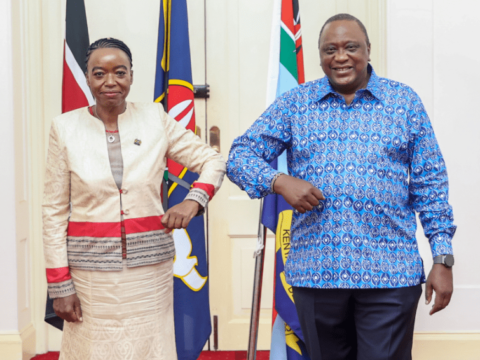 President Kenyatta, in a public statement, lauded Amb. Juma as a leader with an indisputable track record of strategic leadership, management, representation and knowledge of government.

“I have no doubt that Amb. Monica Juma will be a strong consensus candidate, who will deliver an effective Secretariat driven by member state priorities; She will help bolster unity amongst the Commonwealth family, and also enhance innovative partnership that optimizes the impact of our organization,” stated the Head of State.

The President also referred to Amb. Juma as a diplomat par excellence, adding that she has performed in all her other capacities.

Amb. Juma has previously served the country as Foreign Affairs CS, before which she had stints as Principal Secretary in the Defence, Interior, and Foreign Affairs dockets.

“Kenya believes that the Commonwealth remains a primary actor for responding to the current challenges facing its member states and for building a common future,” stated President Kenyatta.

“The success of our organization lies in its ability to effectively address the needs of the member states, shape the collective agenda and implement its decisions for the realization of our common aspirations. All these require steadfast leadership at the Secretariat to deliver a dynamic and influential Commonwealth.”