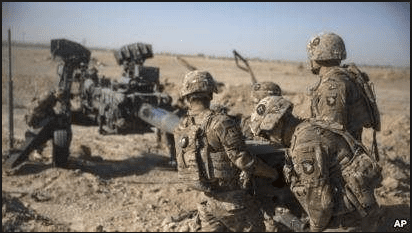 Former senior diplomats who have steered U.S. policy on Afghanistan say U.S. President Donald Trump’s reported decision to pull thousands of troops out of that country complicates U.S. Ambassador Zalmay Khalilzad’s efforts to broker a cease-fire with the Taliban.

Trump announced he was considering withdrawing roughly half of the 14,000 U.S. troops from Afghanistan, shortly after he said American forces would pull out of Syria. Both decisions took many by surprise, including some officials tasked with overseeing U.S. foreign policy.

A former U.S. diplomat, who requested not to be named because of possible reprisal, told VOA that Khalilzad needed flexibility on a U.S. troop pullout from Afghanistan because that has long been a demand by the Taliban.

“What’s problematic is that any gesture indicating draw down had to be on a quid pro quo basis and tied to a cease-fire agreement by the Taliban, which does not appear to be the case,” the former U.S. official said. “And that can have military- as well as policy-related consequences, not to mention the Afghan government circles do not like this situation one bit as they feel they have been sold out by Ambassador Khalilzad.”

Ambassador Richard Boucher, a former assistant secretary of state for South and Central Asia, told VOA the decision to withdraw some troops from Afghanistan was a political decision, not a strategic one.

Former U.S. Ambassador Robin Raphel agreed, and added that the announcement put additional pressure on Khalilzad’s office to come up with a deal that doesn’t damage the U.S. reputation as a reliable ally in the region.

“Otherwise, this would send wrong message to the Taliban and the neighboring countries like Pakistan, who have always doubted U.S. seriousness to stay in Afghanistan,” Raphel said.