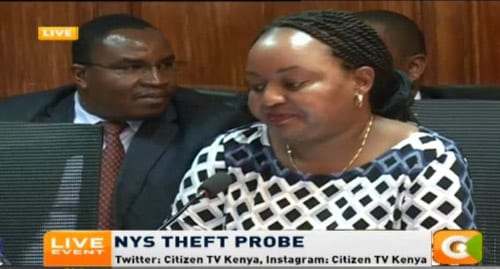 By Calvin Tamanda The on-going probe into the National Youth Service (NYS) scandal point at what could be the set-up of the century, with new revelation raising questions as to whether someone used unknown individuals to loot the money and then blamed it on former Devolution Cabinet Secretary Anne Waiguru. The scandal which began after Waiguru’s supposed whistle-blowing of alleged fraudulent transactions in the Ministry of Devolution fast turned into a political combat between the Coalition for Reforms and Democracy (CORD) and the Jubilee government with the former launching incessant push for her resignation. Months after Waiguru’s departure from the ministry, and her absolution of any wrongdoing by the Ethics and Anti-Corruption Commission, the scandal has taken a new twist, drawing in names from both sides of the political divide. Waiguru in her submission before the Public Accounts Committee (PAC), challenged anyone with evidence that would indicate that she knew, or communicated with either businessman Ben Gethi or Josephine Kabura, to table it. Up to now none has been brought forward. No phone records, no text, no photos, nothing.

Kabura and Gethi are named as key suspects in the scandal that led to the loss of Ksh1.8 billion.
Waiguru has also claimed that some members of a cartel, who were and still are upset by her move to whistle blow and stop further thefts at the Ministry of Devolution, have crafted a meticulous plan to set her up in the NYS saga. Could this be true?

In the past two month, there have been new revelations linking Deputy President William Ruto’s aide Farouk Kibet, and the DP’s close confidants Elgeyo Marakwet Senator Kipchumba Murkomen and Garissa Township MP Aden Duale to the scam. While Duale’s companies are reported to have received tenders from NYS through fraudulent means, Murkomen’s law firm SMS advocate is said to have benefited from the proceeds from one of their client and a key suspect in the scandal – Ben Gethi. Duale and Murkomen have of course denied the allegations, though Mr Kibet has admitted to having received Ksh1.5 million from Josephine Kabura, according to an article appearing on Daily Nation dated November 27, 2016. In the article, DP Ruto’s aide is said to have requested for the money to settle hospital bill of an unmade patient, despite having Ksh6.9 million when the Ksh500,000 was deposited and Ksh12.19 million when the second despot of Ksh1 million was made by Kabura. Kabura has been adversely mentioned as a key suspect in the NYS scandal having received Ksh1.6 billion as payment for irregularly acquired tenders. Kibet had earlier reported that he had received money in form of a soft loan from Ben Gethi, before queerly changing the narrative in his submission to the Public Accounts Committee. Murkomen’s failure to appear before the Public Accounts Committee investigating the scandal, and the refusal by his representative at the hearing Hillary Sigei (co-owner of SMS Advocate) to submit bank records that would be used to establish the link between their client (Gethi) and the loss of Ksh1.8 billion at the NYS makes one wonder, do they have anything to hide? The sudden change of tune among a section of Jubilee leaders including DP Ruto and Murkomen – from defending Waiguru to castigating her and demanding for her arrest over the NYS scandal – also raises questions over the underlying motive behind the about-face. In a bizarre turn of events, Orange Democratic Movement (ODM) chair John Mbadi and the party’s Director of Elections Junet Mohamed have also been dragged into the sludge. According to Kikuyu MP Kimani Ichung’wa, two company owned by Junet (Zeigham Enterprises Limited and Fahaza Limited) are said to have transacted with NYS in a deal worth millions of shillings, having been single-sourced. Junet has however denied the claims saying he relinquished his ownership of the companies in 2012 prior to the 2013 elections while rubbishing claims that her sister may have been involved the scandal. “My sister, like any Kenyans is allowed to do business with the government and if she has done anything wrong, she should face the law,” he said in an interview on Citizen TV last week.

Mbadi has also refuted claims by Duale that two firms associated with him are linked to the NYS scandal.
And the drama continues….

There have also been reports that PAC, which is mandated to investigate the scandal, is divided along party lines with ODM chair John Mbadi claiming that the committee has been compromised. Emerging reports indicate that the only reason Waiguru’s neck is on the chopping board is because she moved fast to unearth elephantine scandal at the NYS and stop further theft at the ministry. Waiguru’s submission before PAC was convincing enough to the point that most MPs who begun the probing session in fervour, with a rare determination to pin the Kirinyaga governorship aspirant to the wall, were left tongue-tied. Her presentation before the committee was also accompanied by evidences including phone records from the Directorate of Criminal Investigations (DCI) that showed connections between Kabura, Gethi, former National Youth Service Director General Nelson Githinji and former Devolution Principal Secretary Peter Mangiti. In her remarks, Waiguru called for thorough investigation to unearth the real beneficiaries of the NYS scandal – and I too laud the call. If Beth Gethi’s involvement in the scandal is proved to be true, then it would indicate ironclad proof that the NYS loot is just “next door”. So is it time we as Kenyans apologised to Anne Waiguru for her public lynching and character assassination?