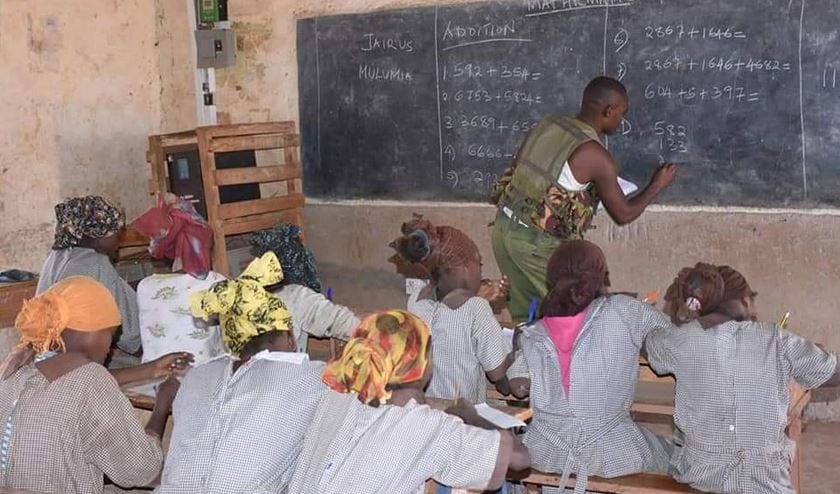 Jairus Mulumia, a police officer who volunteers to teach at Forole Primary School in Marsabit was feted on Jamhuri Day.

President Uhuru Kenyatta conferred him with the Head of State Commendation (HSC) award for his unique contribution to society.

A week before, Mulumia had also been recognized during the Public Service Commission annual excellence awards.

“Through these awards, we hope to transform our public service towards a more citizen-centric focus to ensure that the services we offer are professional, efficient and readily available to citizens,” Head of Public Service Joseph Kinyua had said.

Dr. Kinyua added: “We will forward Mulumia’s name to the President and recommend him for an award so that he becomes a role model to be emulated by others.”

Mulumia hit headlines in September after he was spotted teaching at the school on the war-torn Kenya-Ethiopia border.

During an interview with the Daily Nation, Mulumia noted that teachers posted to the area failed to turn up due to insecurity and he decided to volunteer after discovering pupils were still coming to school.

Education Development Trust Africa posted a picture of him on Facebook saying:

“(Jairus) was part of a security team deployed following a series of banditry attacks in the area, which left several people dead. When our team visited the school last week, some teachers had not reported due to insecurity obtaining in the area. The pupils were idle in class. After getting permission from the headteacher, Mulumia, a trained teacher, got into class 5 and started teaching mathematics. Apparently, only girls in that class had the courage to come to school that day.”

The photo of him in what looked like military gear quickly spread on social media; Jairus would later reveal that he had no idea that his picture had gone viral.

Kenyans applauded him with some saying he is the real definition of ‘Utumishi kwa Kwote’.

On Jamhuri Day, Mulumia was awarded alongside world renowned Peter Tabichi, a science teacher who gives away 80% of his monthly income to help the poor.

Bro. Tabichi, who teaches mathematics and science at Keriko Secondary School in Nakuru, received the the Moran of the Burning Spear (MBS) award.

Mzee Moiyiae ole Nkaka was recognised for surrendering a two-acre piece of land for construction of the Kibuka Community Water Project in Kajiado County.