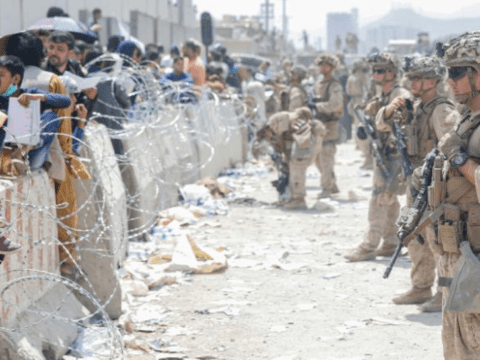 Dozens of US military transport jets were expected to land at Kabul’s international airport on Monday, as about 20,000 people remained at the facility awaiting evacuation, a source close to the situation told CNN.

Plans called for 33 US Air Force C-17s to head to Hamid Karzai International Airport in the next 24 hours, said the source. Each of the large four-engine jets has the ability to take 400 passengers out of Kabul, “which should make a decent dent” in the 20,000 people who are on the airport grounds and trying to get out of Afghanistan after the Taliban took control of most of the country last week, the source said.

But the source said Washington was changing its policy on who would be admitted into the airport and, from Monday on, only American citizens and green card holders and citizens of NATO countries would be allowed past the airport’s gates.

Applicants for the US’ Special Immigrant Visa (SIV) program, which is an avenue for Afghans who worked for US government forces and agencies to get out of the country, would not be allowed into the airport, the source said.

They said the Taliban were now helping filter candidates seeking to enter the airport, by checking their documentation. Only immediate family members such as spouses and children can be brought onto the base by eligible US or NATO citizens.

Even with the new restrictions, thousands of Afghans, mostly military aged males with “no documentation,” remained on the airport grounds, the source said. They had arrived on the second day during the “everyone gets in” lapse in filtering entrants.

The source said there were “no plans to kick people off the airport,” potentially leaving thousands in limbo.

One reason for the chaos was the decision to issue electronic visas, without names or document numbers, to SIV applicants. The visas were then copied as screenshots and sent by Afghans to thousands of other Afghans who were not eligible for access to the airport, a source told CNN at the weekend.

“I don’t think consular, or the administration frankly, realizes how badly they f*****d up by sending that stupid visa and letting everyone in for 24 hours straight,” the source said Monday.

“Some people are saying there’s no way they’ll get even those currently on airport out of here in four days,” the source added.

Flights not reducing numbers on airport

Despite flights from the United States and partner nations taking more than 30,000 people out of the Kabul airport since August 14 — including some 5,000 in a 12-hour period on Sunday, according to a White House official — the airport was still swarming with people trying to get on an outbound plane.

The source said it was unclear how the massive number of flights did not seem to be reducing their overall total and suggested there might be a separate channel in which Afghan security forces, helping patrol the base’s perimeter, had their own means of getting people known to them onto the airport grounds, swelling numbers.

On Sunday, conditions at the airport worsened throughout the day, with its entry gates for the most part closed. There were instances of families being split up and sent to different countries in the chaos.

“I don’t know what they were doing, but there is still local staff struggling at the gates and not even being able to get in,” a source close to the situation told CNN, referring to Afghans employed by the US.

Families were being separated and sent to different countries, the source added. This was “not by design and not really the fault of US officials, but they’re either choosing to come in separately, or getting separated on the way in,” they said.

“They’ve had cases where mom, dad, and children all end up in different countries,” said the source.

On Monday morning, the chaos continued, when sniper fire killed a member of the Afghan security forces helping secure the base, one source told CNN.

The affiliation of the sniper was unclear, the source said.

In the confusion, Afghan forces returned fire, but in the direction of some US Marines, who opened fire themselves, injuring four Afghans, the source said.

The four are in stable condition and there were no US casualties, the source said.

Almost 20 people are believed to have died from stampedes or gunshots around the airport in the past week.

One crush took place outside the airport itself while another happened outside the Baron Hotel, the spokesperson said.

“Conditions on the ground remain extremely challenging but we are doing everything we can to manage the situation as safely and securely as possible,” the MoD spokesperson said.

Earlier in the week, Reuters reported that a total of 12 people had also been killed in and around the airport since the Taliban captured Kabul last Sunday. The report, which CNN has not been able to independently verify, cited NATO sources and Taliban officials.

The JSDF flights would bring back Japanese citizens — some of whom worked for the Japan International Cooperation Agency and other organizations — and Afghans working at the Japanese Embassy or with Japanese missions, Kato said.