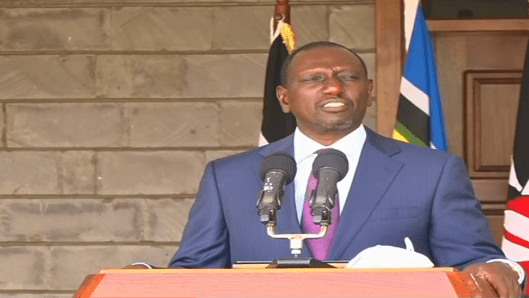 Deputy President Dr William Ruto is among leaders from developing countries who are demanding serious commitment from rich nations to tackle climate change ahead of the COP26 climate summit scheduled for November this year.

“Kenya’s farmers and pastoralists continue to count increasing losses from the adverse impacts of global warming. The UN Climate Change Summit in Glasgow, COP26, should deliver on the protection of the planet and its people from the ravages of climate change,” urged Ruto.

The deputy president made the statement following the release of a five-point plan, known as the Solidarity Package, and supported by half the world’s countries to guide negotiations at the climate summit. The position paper was an intervention following a worrying lack of urgency from the recently-concluded G7 and G20 summits.

With the G7 summit in June failing to make concrete progress on climate finance or even agreeing a timetable for the phase out of coal, there remains a huge amount of work to be done before COP26 begins in November.

The plan lays out a five-point plan for concluding a successful COP26 summit and highlights the key issues which need to be delivered in order to tackle the climate crisis. The five issues that developed countries want addressed urgently and prioritised are:

· Cutting emissions: Despite welcoming recent progress, the sum total of climate policies in place across the world will not keep global warming within the limits that governments agreed in Paris. An acceleration of net-zero targets is urgently needed, led by those with the biggest responsibility and capacity.

· Finance: The promises made by developed countries in Copenhagen in 2009 and again in the Paris Agreement are unequivocal, and must be delivered. At least $100bn per year was promised by 2020 with increased annual sums from 2025. However, this target has been missed and needs fixing urgently if developed countries can trust richer nations at COP26 to keep to what they negotiate.

· Adaptation: With climate impacts increasing, a specific goal of at least 50% of climate finance needs to be committed to help the most vulnerable adapt, with regular reviews.

· Loss and Damage: The consequences of the developed world’s historical failure to cut their emissions adequately are already resulting in permanent losses and damage for the most vulnerable. Responsibilities have to be acknowledged and promised measures delivered

Weighing in on these demands, Ruto added that: “The summit (COP26) should address the needs of the vulnerable and poor people of the world whose struggle every day is made ever so difficult by worsening climate change impacts. The Solidarity Package seeks to address these issues.”

The COP26 talks will address key issues regarding the Paris Agreement such as the promised financial support from rich, polluting nations to poorer, vulnerable countries, as well emissions reductions and new net zero targets.

Many developing countries are keen to cut their own emissions, despite being responsible for only a tiny amount of the climate heating fossil fuel burning which historically made the developed world rich but created the climate crisis the world faces today.

However, they need funding to help them transition to renewables and adapt to the changes which are afflicting their people.