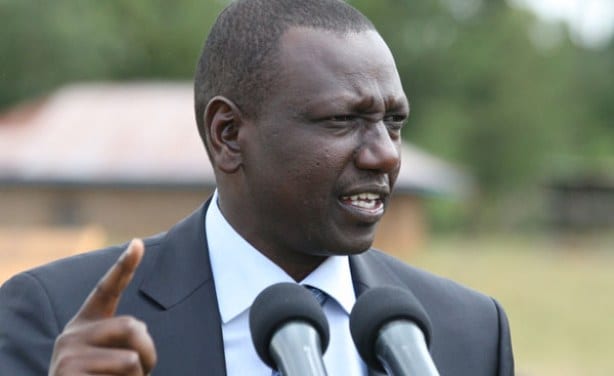 Deputy President William Ruto has warned school heads of public secondary schools against charging extra fees beyond what is specified in government guidelines.

Speaking in Kilifi County on Saturday, Ruto said the government had increased capitation for secondary schools in addition to scrapping exam fees for both Standard Eight pupils and Form Four students.

Ruto also directed the Ministry of Education to investigate cases where head teachers are forcing parents to pay extra fees.

The deputy president also decried the high number of school dropouts in Kilifi County because of early child marriages calling for action to be taken to address the issue.

Orange Democratic Movement (ODM) has on its part challenged Jubilee government to ensure public secondary schools adhere to the school fees guidelines released by the Ministry of Education.

ODM Chairman John Mbadi said that parents have been burdened by increased fees in public secondary schools despite the Ministry capping the fees.

In a statement, Mbadi said increase in the cost of secondary school education comes at a time when public universities are also toying with the idea of increasing their fees.

“Education is driving too many families into poverty in addition to shuttering the future of many young people because of its high cost,” stated Mbadi.

The ODM chair called on the government to act fast to address the issue as students resume school this week.

“The Government must also make necessary interventions to help the schools meet their requirements without passing unnecessary burdens to already overburdened parents.”

In addition, he made an appeal to the government to reconsider its priorities and redirect money from non-priority issues and channel it to schools.

According to the guidelines, public secondary school students in day schools are supposed to pay Sh9,374 while those in boarding school are to pay Sh53,553. Students in special schools should pay Sh37,210 per year.

Meanwhile, Education Principal Secretary Belio Kipsang has warned schools against violating the Gazette Notice no. 1555 dated March 2015 which sets the fees to be paid by parents.

Kipsang called on county directors of education to forward list of schools that have flouted the fee guidelines for action to be taken.