DP Ruto to be removed from Jubilee Party leadership, barred from using headquarters 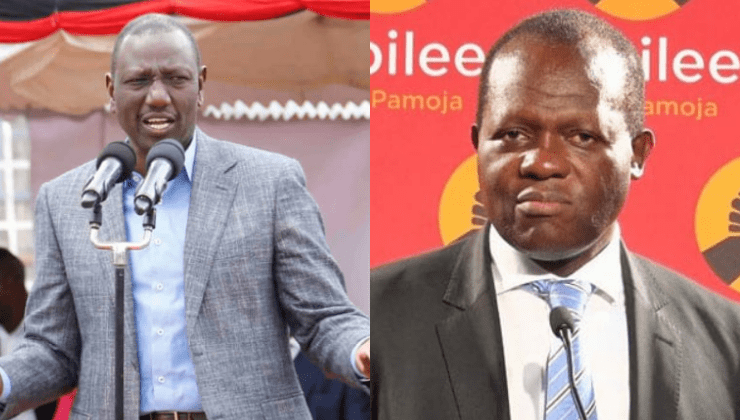 The Jubilee Party National Management Committee (NMC) has recommended the removal of Deputy President William Ruto as the deputy party leader and barred him from using the party headquarters to advance his political ambitions.

This was announced on Friday by Jubilee Secretary General Raphael Tuju after DP Ruto on Thursday staged what has been described by his opponents as a bloodless coup at the party headquarters.

Ruto on Thursday morning stormed the Jubilee Party headquarters where he hosted over 30 MPs with no senior party official around to receive him; this painting a picture of an attempt by the DP to regain control of the party.

This came as President Uhuru Kenyatta embarked on a three-day official trip to France.

Addressing the media on Friday afternoon, Tuju described the deputy president’s action as an “attempted power grab” adding that Ruto has in the recent past exhibited “arrogance, insolence and disrespect of President Uhuru Kenyatta who is also the Jubilee Party Leader.”

Tuju said Ruto’s move to invite the MPs, some of whom he described as “foul mouthed”, to the Jubilee headquarters almost created an ugly confrontation with MPs allied to the President.

“Yesterday, the DP turned up at the Party Headquarters with more than 30 MPs many of them known avowed abusers of the President. These are the same fowl mouthed MPs that are on record attacking government programs like the Huduma number.

“It is disturbing that the Deputy President invites this same retinue to the Party Headquarters to give them a platform to increase polarisation in the Party. Indeed, that move of inviting MPs allied to him almost created an ugly confrontation with close to 40 MPs not allied to him who also wanted to storm the headquarters,” said Tuju.

The Secretary General further faulted Ruto for expressing his dissenting view on the party’s decision not to field a candidate in the forthcoming Msambweni by-election and further unveiling and declaring his support for an independent candidate in the mini-polls.

Ruto was also called out for boycotting Monday’s COVID- 19 conference where his seat remained  conspicuously empty throughout the event where he was included in the program to make remarks and according to State Protocol, then invite the President to address the conference.

“For such travesty, the only thing we have received from the DPs camp are tweets from his allies rubbing salt into the injury,” said Tuju.

The DP was also fingered over remarks by Kapseret MP Oscar Sudi who was accused of incitement for insulting former First Lady Margaret Kenyatta.

“We have witnessed the unprovoked and inexplicable abuse of Former First Lady Mama Ngina Kenyatta by political allies of the Deputy Party Leader and the subsequent response by Hon. Ruto that exhibited not an ounce of contrition. Some of the abuses have been expressed in the most primitive and vulgar,” Tuju noted.

The Jubilee Secretary General thus noted that the party’s National Management Committee had resolved that moving forward, Ruto will not allowed to run his political operations at the Pangani-based headquarters.

“…the Deputy Party Leader as a self-declared Presidential Candidate for 2022 will not be allowed to use the Party headquarters as a centre of operationalisation of his 2022 campaign and to use the centre for intimidation of any potential opponent or Party staff…. It is no longer tenable for the DP to use the Party platform including statements from the Party Headquarters to advance his divisive so called hustler politics that are counter to the Party and Presidents platform of uniting the country, the fight against corruption and the agenda four items,” said Tuju.

He further announced that the NMC has recommended that Ruto be ousted as the Deputy Party leader for opening offices of a rival faction of the party dubbed Jubilee Asili.

“…the NMC has recommended to the NEC that the DP ceases to be Deputy Party Leader after he opened the so called Jubilee Asili offices that is reserved for him and his allies until such a time that this development of Jubilee Asili is discussed at the NEC,” said the Secretary General.