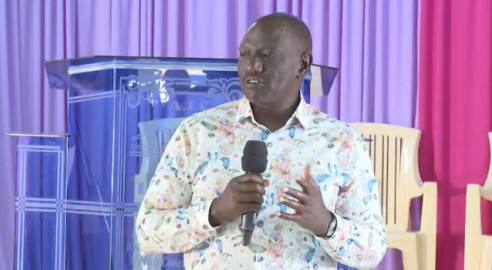 The DP, speaking during a service at the ​​AIC Llmasin Church in Kajiado on Sunday, said that he, too, was awaiting Mudavadi’s announcement eagerly.

Ruto added that his anticipation for the Sunday announcement is that it will change the country’s political arena for the better.

“As we wait for the earthquake, it is our prayer that it will be the one that is going to eliminate the politics of deceit and put Kenya before the selfish interest of anybody or any group of people,” he stated.

Mudavadi has promised Kenyans an earthquake of gargantuan political proportions as his party holds its National Delegates Conference at the Bomas of Kenya.

The party is also expected to reveal its flag-bearer, Mudavadi, before a delegation of 6,000 invited guests.

The ANC leader has been teasing his much-awaited political declaration as one that will shake up and completely alter the Kenyan political course.

While urging Kenyans from across the country to make sure they are near a TV set on Sunday, Mudavadi has promised that the history will be made.