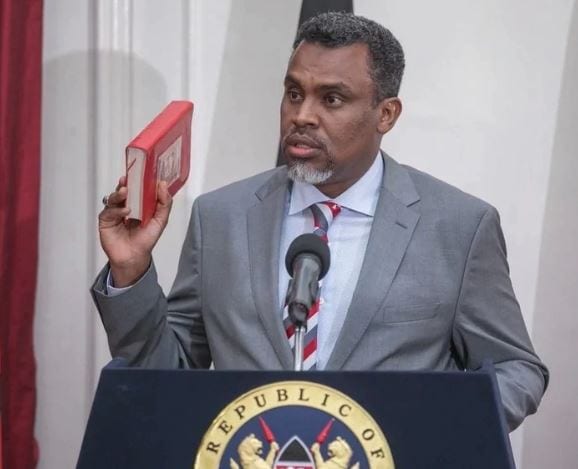 The Director of Public Prosecutions Noordin Haji has vowed that his office will wage an aggressive effort against all forms of corruption even as he grapples with limited resources.

The DPP, speaking on Tuesday after the arrest of Deputy Chief Justice Philomena Mwilu over abuse of office allegations, said that due to the lack of enough resources, they have been forced to priorities.

“Our resources are limited, we cannot be everywhere as ODPP; for now, we are prioritising and being strategic in our actions so as to achieve the maximum possible impact in the shortest period,” said Mr. Haji.

“In keeping with our constitutional mandate, the ODPP must and will wage an aggressive effort against all forms of corruption.”

The DPP mentioned four areas that seem to be on his graft war radar; counterfeits, cost of energy, taxes and high cost of land.

“Our country is being torn apart by people who have been placed in positions of trust and who in turn abuse this trust,” he said.

On the issue of counterfeit and poisonous products, Mr. Haji said; “We have a duty to protect the health of our Kenyan people by ensuring that products offered for sale are properly and accurately tested to confirm they are of good quality and safe to use.”

“Over the years a system of chaos has taken root in our country. Millions of young people are unemployed partly because factories are collapsing or stagnant, stifled by hostile business environment created by corruption.”

He was adamant on the issue of taxes and misappropriation.

“All of us must pay taxes so that the government can have the revenue to provide Kenyans with services and to support devolution. Once those taxes are paid they have to be used only for the intended purposes and not misappropriated by a few people… ”

Mr. Haji singled out the National Land Commission saying some of its officials are helping inflate the cost of land which is frustrating government projects.

“The government is increasingly finding it difficult to implement infrastructure projects for the benefits of Kenyans. The cost of land, driven up by speculators with the help of a few officials in the NLC has become a heavy stone around the necks of wananchi,” he said.

He also vowed to remain neutral in the war on corruption saying he will follow the tenets of the constitution.

“Law enforcement decisions must be untainted by partisanship and under my stewardship, the ODPP will adhere fully to the Constitution and not the fleeting interests of anyone.”

“The checks and balances in our constitution are meant to establish a healthy intention among the branches of government as it ensures none oversteps his boundaries while keeping within the dictates of our Constitution,” added Haji who said that Justice Mwilu’s arrest has nothing to do with the ‘we shall revisit’ political threats.