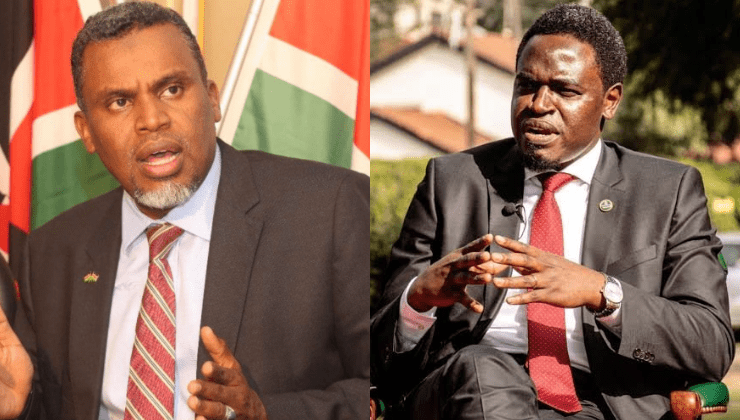 Havi is accused of assaulting suspended LSK CEO Mercy Wambua at the society’s offices on Gitanga Road on Monday.

DPP Haji, in a statement released following the court order on Wednesday, however said the order was issued prematurely as no decision had even been made regarding the assault case yet.

According to the DPP, he only just received the file from the Directorate of Criminal Investigations (DCI) for directions.

DPP Haji further intimated that should he find cause to charge Havi then he will proceed as that is a independent decision granted to his office by the Constitution.

“The Office of the Director of Public Prosecutions (ODPP) confirms receipt of a duplicate file from the Directorate of Criminal Investigations (DCI) relating to an assault charge against the President of the Law Society of Kenya (LSK), Mr. Nelson Andayi Havi based on a complaint by Ms. Mercy Kalundu Wambua, CEO of LSK,” read the statement.

“The file was submitted to the ODPP on the 14th July 2021 at ODPP House, Ragati Road at 8:30 am for independent perusal and directions. While the file is still under review, it has come to our attention and knowledge, through the social media, of a ruling in Nairobi High Court Judicial Review Application No. HCJR/Eo9o/2o2i, Nelson Havi Vs Director of Public Prosecutions & Inspector General of Police granting the applicant leave of the Court to apply for Judicial Review by way of orders of Certiorari and Prohibition for purpose of quashing the decision of the Director of Public Prosecutions (DPP), which decision is yet to be made.”

It further added: “The DPP affirms that the said application is pre-mature as no decision has been made in relation to the assault case and reiterates that the decision to charge is independent and the ODPP owes fidelity only to the Constitution in making the decision to charge. The DPP shall challenge the order which was prematurely granted ex-parte.”

Havi was arrested and grilled on Tuesday before being released on a Ksh.10,000 cash bail later in the evening.

He then went on to obtain orders from the High Court barring the DPP, DCI and Inspector General of Police from arresting or prosecuting him over the allegations.

Wambua alleged that Havi assaulted her during a meeting at the LSK offices on Monday.

Havi has however dismissed the assault claims, instead accusing the LSK CEO of shielding two of his former predecessors from liability over the alleged plunder of hundreds of millions of the society’s funds.