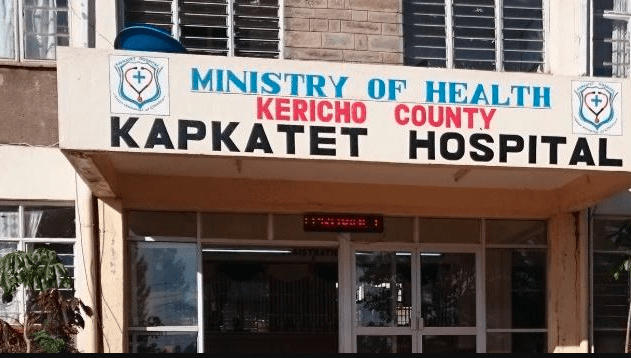 Drama unfolded at Kapkatet Hospital in Kericho County after a 32-year-old patient who had been mistakenly transferred to the mortuary regained consciousness.

The man identified as Peter Kiplangat Kigen is said to have been rushed to the facility on Tuesday morning after he fainted at home.

“Kigen had been suffering from a stomach ailment which forced us to rush him to hospital,” said his uncle Denis Langat.

Langat said the nurse who received Kigen at the hospital casually checked on him before pronouncing him ‘dead’.

The patient was immediately transferred to the hospital mortuary where he was received by an attendant.

The mortuary attendant is alleged to have immediately begun the process of preserving the body.

According to the uncle, the attendant made an incision on the right leg of the patient that was to be used to infuse formalin into the body.

However, the patient regained consciousness and began to wail in pain causing those around the vicinity to scamper for their safety thinking that a dead man had ‘resurrected’.

The attendant later wheeled the patient back to the hospital’s casualty section where first aid was administered.

Kigen was then taken to the ward where he is currently recuperating.

The family of the patient is now demanding justice, accusing the hospital of negligence.

By the time of publishing, the hospital management and the county’s health department were yet to comment on the matter.