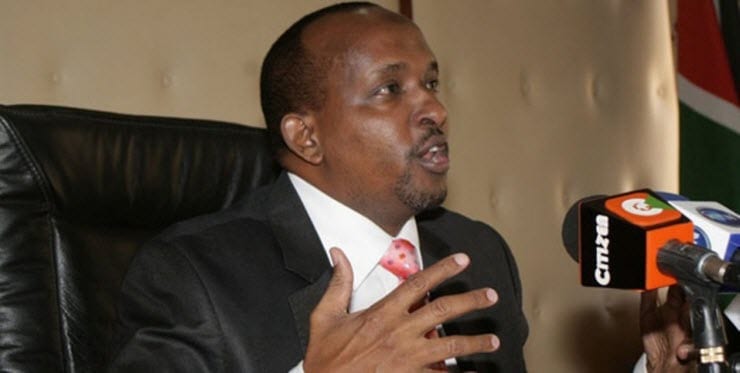 National Assembly Majority Leader Aden Duale on Tuesday evening dropped a bombshell on the controversy surrounding the importation of contraband sugar into the country.

Training his guns on top government officials, Duale accused National Treasury Cabinet Secretary Henry Rotich and his Interior counterpart Fred Matiang’i of protecting the unscrupulous sugar barons behind the importation of the substandard sugar that has so far been netted in over 10 regions across the country.

Duale claimed that CS Rotich had given”duty free” status to a number of companies that are behind the importation of the said sugar, while Matiang’i was turning a blind eye to the actual culprits behind the sugar scam.

The House Majority Leader alleged that 1 million bags of the contraband sugar were lying at a warehouse in Nakuru while thousands of others were at go-downs  in Nairobi and Mombasa.

“As we sit here I want to ask the Interior Cabinet Secretary to go Nakuru blankets godown… There are 1 million bags of that sugar, at Raiply godown in industrial area there is sugar, in Menengai refineries and JB Maina Warehouse in Mombasa there are thousands of bags,” said Duale during a heated debate on the contraband sugar.

He went ahead to name companies he claims had been used to import the illegal sugar.

“Why is the Interior Minister going round Eastleigh, Kisii, Meru… We want to know who is protecting this importer,” Duale posed.

The House Majority Leader claimed the man behind the contraband sugar is a “big logger” behind the rampant destruction of forests in the country.

“The culprit is in town walking free and we want to know who is protecting him. The same guy is the biggest logger in our country. He finished our forests and has been made a member of the Kenya Forest Board,” he said.

“I hope the Interior CS is watching me… The problem in this country is that people look for chicken thieves and watchmen. We are being taken round.”

Duale has pledged to make public names of individuals he termed as untouchable barons on Wednesday.