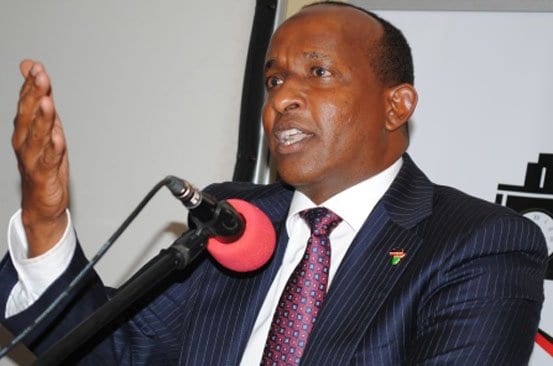 National Assembly Majority Leader Aden Duale today lashed out at MPs opposed to the nomination of  IEBC Chair Wafula chebukati on the grounds that he comes from the same community as IEBC CEO Ezra Chiloba.

Speaking to the press at Garissa town, Duale said the constitution does not have a provision that states that the IEBC Chair and CEO cannot come from the same community.

“CEO Chiloba applied for the IEBC job position and was recruited in a very fair, transparent, competitive and vigorous process and so is the current chair. The individuals bringing all this claims simply believe in ethnic politics,” he said.

Duale lauded President Uhuru Kenyatta’s nomination of  Chebukati as the IEBC chair, saying that the lawyer was fully deserving of the post.

The list of nominated IEBC Commissioners will be submitted to parliament next week for vetting.

Earlier in the year, the Opposition took to the streets to demand for the removal of the team that administrated the 2013 polls, saying they could not be trusted to referee the 2017 General Election.

This eventually resulted in the recruitment of new commissioners to replace the Issac Hassan-led team.