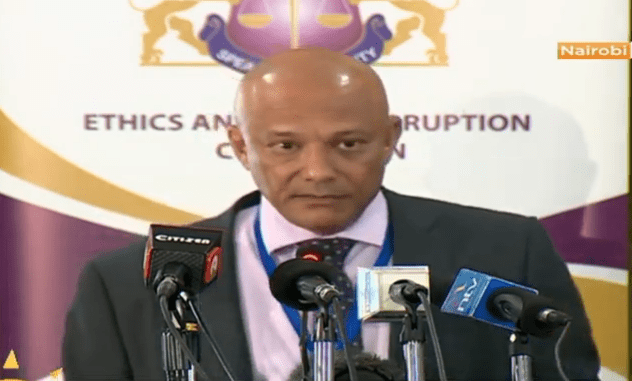 Speaking during the opening of Africa Anti-Corruption Day in Nairobi, Mr. Mbarak stated that the funds – recovered through the Alternative Dispute Resolution (ADR) method – was a huge step up from the Ksh.1 billion recovered in the last five years.

According to the EACC boss, some of these recoveries include a plot in Kilimani next to Yaya Center which was handed back to the University of Nairobi (UoN) as well as 140 acres of land belonging to the Kenya Agricultural and Livestock Research Organization (KALRO) in Naivasha.

“Towards the end of the commission of the financial year of 2018/2019, about 10 restraining court orders restricting transfer and disposal of various properties worth approximately Ksh.2.9 billion was done,” he said.

Mr. Mbarak also added that the commission had so far averted the loss of about Ksh.5.8 billion through information received from both members of the public and the media.

The EACC chief stated that, in future, transactions beyond a certain amount will be limited to electronic transfers only so as to limit, for instance, purchases of multi-million shilling homes in cash presumably gotten by ill means.

He commended the commission’s collaboration and exchange of information with various agencies such as the religious sector, Kenya Revenue Authority (KRA), the financial reporting sector, Asset Recovery Agency (ARA), as well as the Central Bank of Kenya (CBK).

“As a result of this collaboration, there have been successful stories such as the case of former Financial Controller of the National Water Conservation and Pipeline Corporation who forfeited to the State unexplained assets worth Ksh.41 million,” said Mr. Mbarak.

A former Managing Director at Kenya Ports Authority (KPA), he added, was also ordered by the courts to forfeit assets worth Ksh.74 million.

He further complained about the current framework of wealth declaration saying it is open and lacks transparency, hence making accessibility by law enforcement quite cumbersome.

“We are seeking amendment of the law in order to automate the management of the declaration process and enhance accessibility by the enforcement agencies. This will also increase transparency and the trust of citizens in the public administration,” said Mr. Mbarak.

Mr. Mbarak also defended EACC from claims of slowing down on investigations saying sometimes probes extend outside Kenya and into countries with different laws.