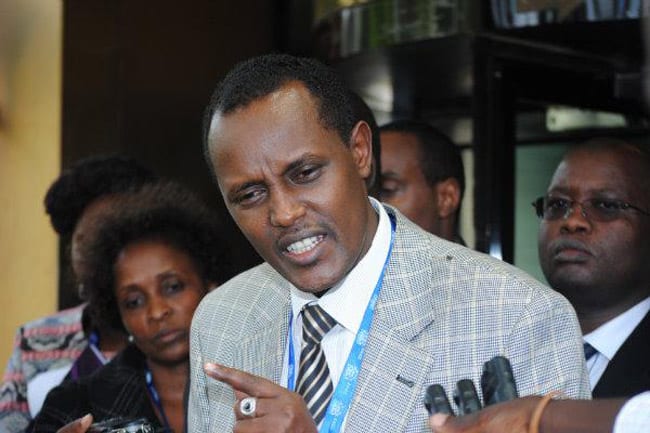 The Ethics and Anti-Corruption Commission (EACC) has summoned Health Cabinet Secretary Cleopa Mailu and his Principal Secretary Nicholas Muraguri over the alleged loss of Ksh5 billion at the Ministry of Health.

In a statement to media houses, EACC CEO Halakhe Waqo said that the summonses to Mailu and Muraguri are attributed to their status as key officials in the Ministry of Health.

Muraguri is scheduled to appear before the commission on Wednesday while Mailu is set for Thursday as the commission seeks to get to the bottom of what poses to be the biggest scandal to rock the Jubilee Administration this year.

Waqo said that Internal Auditor Benard Muchere and the Head of Accounting Unit Joyce Mutungi had already recorded statements at the commission on the matter.

Since reports about the alleged scandal broke last week, Mailu and the PS have been under pressure to explain how such huge sums of money, some which were to be allocated for free maternity and children’s vaccine, were spent.

“While this is still a case of concern since any budgetary allocations should be taken through the parliamentary process, it is vital to note that medical supplies are equally important hence it was a case of good intention. But we are investigating this aspect,” he said.

Mailu denied that any money was lost from the ministry, saying the figures in the audit report carried out by internal auditor Bernard Muchere were miscalculated.

In his address on Sunday, Mailu said that there were discrepancies in the report, faulting Mr Muchere for leaking the report to the media before key ministry officials were given a chance to respond on key concerns.

“I am not happy that the document leaked before my staff could comment on the key concerns raised. We have concerns with the report and the methodology used to reach the conclusion therein. But, we know that the issue is already in the public domain; we would like to call for patience as we investigate the matter,” said Mailu.

“We have not reached a state of claiming that there was fraud or theft. We are looking at the matter. We can visualize the extent of the budget and talk about figures that exist. It is shocking that the amount noted in the audit report is Ksh5 billion because upon evaluation of the supplementary budgets some of the budgets were slashed.”

Already pressure is piling for CS Mailu and PS Muraguri to reign over the scandal, though the two have vowed to stay put as investigations continue.’

Mailu has stated that upon the completion of investigations, he would take action against anyone who would be implicated in the scandal.

Several groups, led by activist Boniface Mwangi and Thirdway Alliance party leader  Ekuru Aukot have planned a demonstration on Wednesday to Afya House to call for the removal of the CS.