Early surge of Democratic contenders for 2020 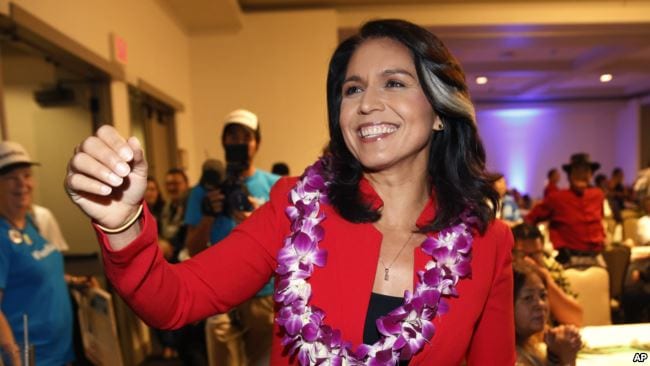 Several Democrats have taken steps in recent days to get an early jump on the 2020 presidential race.

Democrats expect a large field of candidates will compete to take on President Donald Trump when he runs for re-election next year. But many analysts believe that as of now there is no clear front-runner in the Democratic field.

Democrat Elizabeth Warren was among the first out of the starting gate with trips to the early contest states of New Hampshire and Iowa, focusing on finding ways to help middle- and lower-class Americans.

“Today a minimum wage job in America will not keep a mama and a baby out of poverty. Think about that difference, because for me that is what this is all about,” Warren said during a recent campaign tour.

Joining Warren on the campaign trail this month was former Housing secretary Julian Castro, who announced his candidacy in his home state of Texas.

Warren is one of several Democratic women either in the race or about to join, including New York Senator Kirsten Gillibrand, Hawaiian Representative Tulsi Gabbard, California Senator Kamala Harris, and Minnesota Senator Amy Klobuchar.

But many other contenders could join the crowded field, including former Texas congressman Beto O’Rourke, who lost a close Senate race to Republican Ted Cruz.

New Jersey Senator Cory Booker and former Vice President Joe Biden could also join the race soon. Biden was a fixture on the campaign trail last year during the midterm elections where he emphasized the need for Democrats to counter President Trump.

“The only thing strong enough to tear America apart is America,” he said. “We have seen it start, and we have to stop it now! Right now!”

Biden may be the best known, but at the moment most analysts believe that no Democrat has a clear advantage.

“Even Biden is not a heavy front-runner,” said University of Virginia political scientist Larry Sabato via Skype. “He has been showing up at the 30, 35, 40 percent mark (in the polls). That is not nearly as good as some front-runners like Hillary Clinton in 2016 at this time in the race.”

But Biden does seem to have an advantage in name recognition and approval among Democrats in recent polls. A recent George Washington University Poll found Biden at the top of the list of potential Democratic contenders for 2020.

Last month, a Quinnipiac University poll had similar findings. Biden had a favorable rating of 53 to 33 percent in that poll. The breakdown on Sanders was 44 positive to 42 percent unfavorable. And for Warren it was 30 percent positive, 37 percent unfavorable.

In terms of raw support among Democrats, a Morning Consult/POLITICO poll from November found Biden on top with 26 percent support, followed by Sanders at 19 percent and O’Rourke at 8 percent. Warren placed fourth with 5 percent support followed by Harris at 4 percent.

Many more Democrats could toss their hats into the ring in the coming months, suggesting a very competitive and length primary battle.

“I think what is going to be clear in this nominating process is that it is not going to be a coronation, like you’ve seen Al Gore over Bill Bradley (in 2000) and with Hillary Clinton over Bernie Sanders (in 2016). I think it is going to be hotly contested,” said analyst Jim Kessler of Third Way, a center-left public policy group in Washington.

On the Republican side, some are wondering if President Trump might get a primary challenge next year. Trump remains popular within the party even though his overall public approval rating is on the decline of late.

Among those considering a challenge to Trump from within the party is former Ohio governor John Kasich.

“I would be running to be somebody to try and bring the country together,” he said. “That is what it would be about.”

Trump’s re-election focus so far has been to shore up his political base, and so far his core supporters are generally hanging with him, even on the government shutdown.

That loyalty to Trump could make it difficult for any Republican to mount a serious challenge to the president from within his own party.