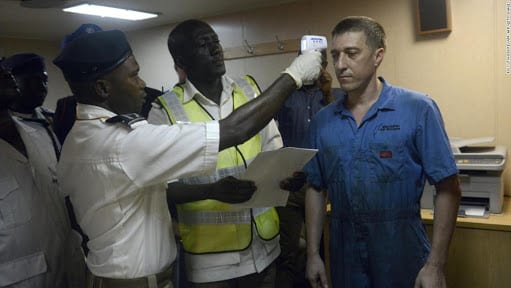 Nigeria’s airports, seaports and land borders have been placed on high alert after the Democratic Republic of Congo (DRC) declared an outbreak of Ebola this week.

Health Minister Isaac Adewole told CNN that people traveling from the Central Africa country where 17 people are suspected to have died from the viral hemorrhagic fever, will undergo temperature screening at all borders of the country.

“We are increasing surveillance on air, sea and land borders for all travelers.

“Those coming from DRC will be monitored after they have been cleared by health officials at all the ports,” Adewole said, adding that this included transit passengers from high-risk countries.

Adewole told CNN the government had reactivated Emergency Operation Centers created during the 2014 Ebola outbreak to prepare for any confirmed cases.

The health minister added that Nigeria was considering sending a team of health workers to the DRC to help contain the outbreak.

Nigeria recorded its first case of Ebola in 2014 after a government official named Patrick Sawyer collapsed on arrival at the airport in country’s biggest city, catching health authorities unaware.

Adedavoh was a doctor who defied orders to allow him to leave the hospital and saved Nigeria from a mass outbreak in the process.