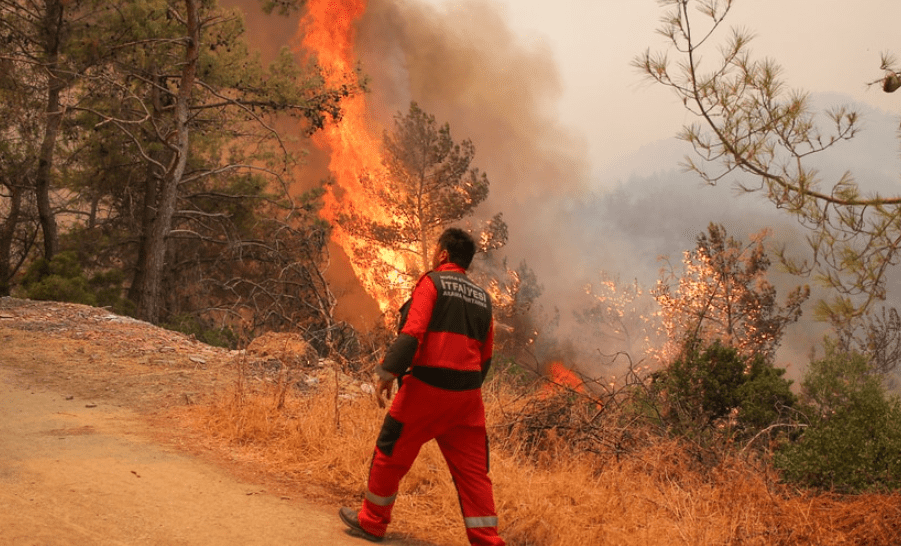 Eight people have been confirmed dead as a result of more than 100 fires along Turkey’s southern coast as firefighters backed by helicopters fought blazes Sunday that threaten some of country’s main tourist areas.

In small boats, residents and tourists in the Turkish holiday beach destinations of Antalya and Mugla fled. In case bigger evacuations are needed, the coast guard and two navy ships were stationed off the coast.

The hot weather and dry winds in southern Europe have contributed to wildfires across the Mediterranean region, including in Sicily, Italy and western Greece, and the Aegean region.

But Turkey has been hit especially hard. Turkish authorities say that most of the fires are under control. But some resorts remain under threat, and with temperatures forecast to soar to new records in coming days, the fight appears far from over.

At least 27 people affected by the fires were receiving treatment Sunday, while hundreds of others had been released, according to Turkey’s health minister, the Associated Press reported.

Since Wednesday, wildfires ignited in 32 provinces, according to the agriculture and forestry ministry, the AP reported. While 117 wildfires were under control, he said.

The cause of the fires is a source of speculation, with some authorities saying they are investigating allegations of arson. Turkish President Recep Tayyip Erdogan said that one of the fires was started by children, the AP reported.

“I feel terrible; we are under stress because it’s very hot here. The one that started in Muscular on the airport road in Bodrum is still spreading; the others have been put down. As the wind is picking up, it’s getting more dangerous again,” Birder said.

The fires are dealing a blow to Turkey’s vital tourism industry, still trying to recover from losses caused by the COVID-19 pandemic. Many farmers, too, have been devastated by the fires with livestock killed.

On Saturday, Erdogan, in a 30-vehicle convoy, visited some of the worst-hit resorts. He declared the region a disaster zone, promising compensation for those who have suffered losses. He gave a chilling warning to any perpetrator.

“If you rip our heart out, I swear, we will rip your heart out; if we find such a connection — there are already some indications — we will do whatever it takes,” Erdogan said.

The government is facing growing criticism that the country’s fleet of firefighting planes are out of action, relying instead on three rented Russian planes.

Erdogan said that more planes had arrived, and more were on the way, from neighboring Ukraine, Russia and Azerbaijan. The European Commission sent Turkey one firefighting Canadair plane from Croatia and two from Spain, according to the AP.