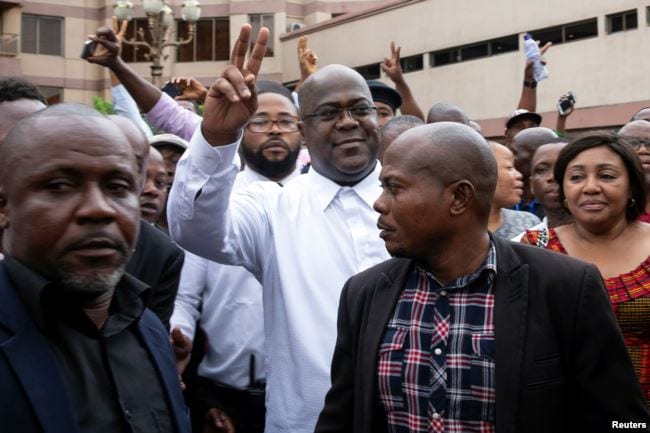 This is new territory for the Democratic Republic of Congo (DRC): the presidential election is over, and the nation appears poised to see its first-ever opposition president take power.

But after a poll that has been widely criticised for irregularities and delays, tensions are running high. Several African bodies are calling for a recount, and the candidate who says he was cheated out of victory has challenged the official results in court.

On Saturday, opposition coalition leader Martin Fayulu, who was favored by polls to win the December 30 vote, asked the Constitutional Court to order a recount.

On Sunday, Fayulu attended church in the capital, Kinshasa, with his family and a bevy of enthusiastic followers.

“We have faith, and our faith is intact,” Fayulu said, holding his Bible. “Undaunted. Because the people have decided, and the will of the people will be realized. I am a man of faith.”

Fayulu’s choice of venue was no accident. For many Congolese citizens, the Catholic Church is the sole provider of schooling, health care and basic services.

And so, when the church said vote tallies collected by its 40,000 election observers show Fayulu won the election, citizens listened.

Then, last week, the electoral commission declared that another opposition leader, Felix Tshisekedi, was the winner. That announcement sparked surprise and outrage — and not just from the usual quarters.

The Southern African Development Community, SADC, called for a recount of the vote and a government of national unity. Their call was supported late Sunday by another African bloc, the International Conference of the Great Lakes Region.

Analyst Stephanie Wolters of the Institute for Security Studies says these statements from regional mediators are surprising.

“It is a departure from how they’ve handled electoral crises in other states,” she told VOA. “It’s also certainly a departure from some of the weaker statements that SADC has made on the DRC, it’s really taken a very hands-off approach to this electoral crisis over the last three years, so it’s a surprise. In terms of how effective it can be, I think we have some doubts.”

That’s because, she says, the body in charge of declaring a recount – the Constitutional Court – is loyal to longtime President Joseph Kabila.