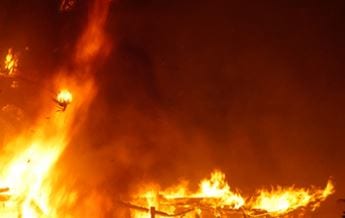 A man and his one-year-old son burned to death after he set their house on fire at Siakago Police Station staff quarters in Mbeere North sub-county, Embu County.

The man’s wife – Jane Reruma – was left with serious burn injuries and is currently recuperating at the Kenyatta National Hospital. The 28-year-old woman is a police constable attached to Siakago Police Station.

According to the house help, Sheila Josephine, the 30-year-old man came back to the house at around 9pm on Monday night carrying a jerrycan containing petrol. He then began a confrontation with his wife after which he forced her to the bedroom and locked the door.

Josephine narrated that the man went ahead to set the house on fire, thereby burning himself and his son to death as his wife managed to escape.

The man’s wife reportedly, after escaping, started screaming and calling for help from neighbours who rushed to the house and tried to put off the fire.

Simon Muchiri, an eye witness, said he heard people crying for help and, on rushing to the scene, found the house already on fire. He stated that he, however, joined hands with other area residents in putting out the fire.

On containing the situation, according to Muchiri, they found the man’s body on the floor and that of the boy on the bed.

Efforts to reach Mbeere North OCPD Jane Sang were futile since, as at the time of publishing this story, Citizen Digital was informed that she was away on leave.