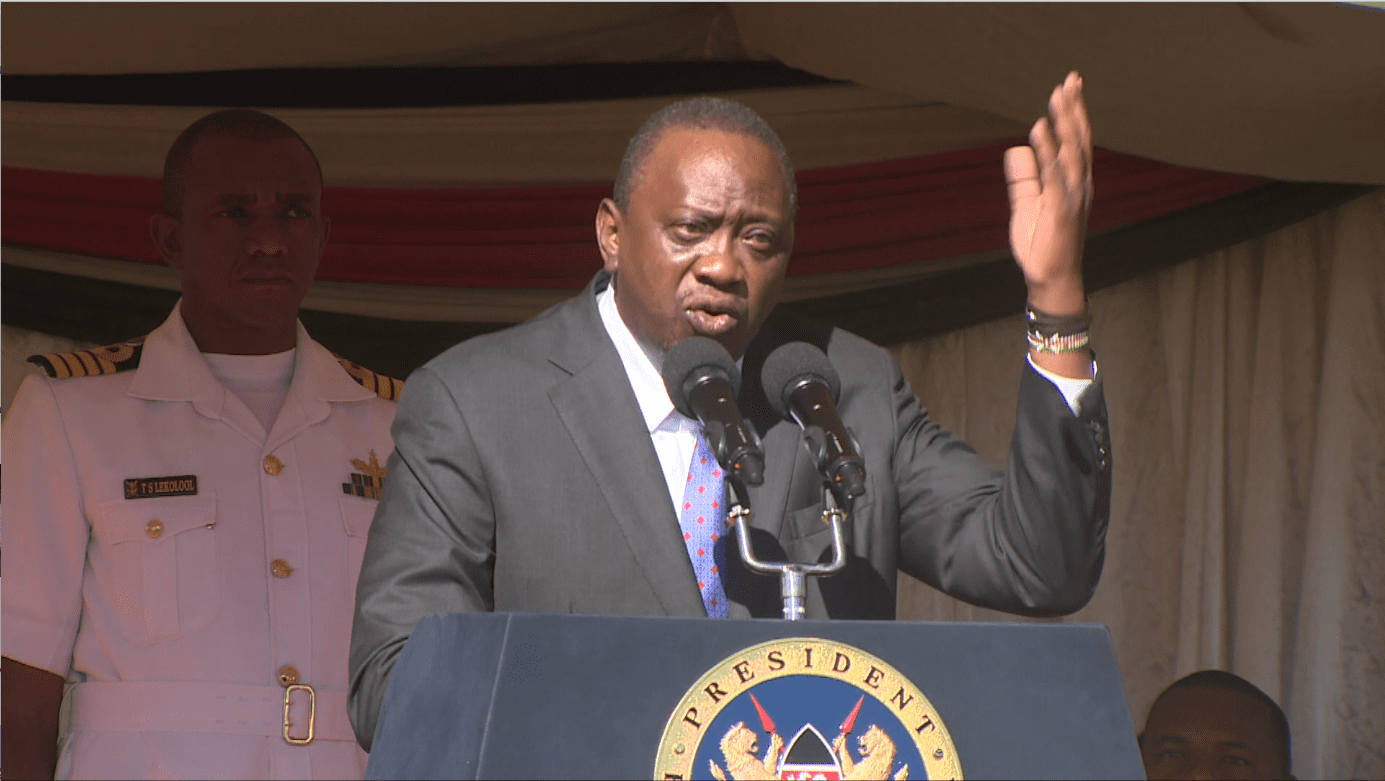 President Uhuru Kenyatta has hit out at political leaders who have once again embarked on politicizing the recently unveiled Building Bridges Initiative (BBI) report.

Speaking on Wednesday in Kiambu County, a visibly angry President Kenyatta called out the leaders, most of whom are allied to Deputy President William Ruto, saying they lack a sense of direction.

The Head of State pointed out that before the release of the BBI report the said leaders went into overdrive campaigning against the document, adding that the same politicians are once again on the loose, trying to set conditions on implementation of the report.

“There comes a point where we say enough is enough and we are tired! Before we released the report, they were all over for a month lecturing us about things. Now the report is out and they have taken another direction. These are people who do not know where they are headed,” said Kenyatta.

He was speaking at the official hand-over ceremony of the Mang’u Dispensary Outpatient Block in Kiambu County. The facility was developed by the Japanese Embassy in Kenya in collaboration with the Catholic Church, reportedly, at a cost of Ksh.8 million.

The President said he was fed up with the ongoing politicking over the BBI report which he reiterated is aimed at building a cohesive and progressive country.

“Let them not come here and lecture you on what to do. You are not foolish and let them not take you for fools. Let no one tell you what to do. Read the report for yourselves and decide what you want,” said Kenyatta.

“I always say that my joy is to see that people have voted and have gone to their homes without being worried that their property will be burnt or they will be slashed with a panga… not worried where their children are because it is election day. You need to vote and go home and hopefully your wife has cooked chapatis, you eat with your children and wait for the results. Don’t you want peace? Don’t you want unity?”

The President once again cautioned the political class against divisive politics saying individual thirst for power should not be allowed to override national interests.

“Your only concern is how you will live not about who the leader is. Whether the leader is called Njuguna or Waweru or Haji or Onyango or any other name, they will not be able to change your life or lead you to fight or destruction of your business… you will be able to continue with your stuff.

“I am a bit angry but it is because every day when you wake up, it is just lectures. And instead of them coming to build you a hospital like this one, they are just in meetings on oh things are like this, things will go this way. There is no foolish person here… No one needs to be taught…,” said Kenyatta.

He added: “When the day comes, only God and you the voters will decide who will be elected. Let them stop bothering us. Read the BBI report and lets unite this country.”

In the off-the-cuff speech made in his native Kikuyu language, the President sounded a warning to the political leaders seen to be undermining his quest to have the BBI report successfully implemented.

“They see me silent and think ‘he is just there and knows nothing’. There is nothing I do not know and when the time comes, I know those who speak and they are not those who are speaking now. When the time comes, we will come and we will speak with you on what we will do. Mwaka mpya, we are with you. Let’s just first listen to their lectures. We are with you.,” he said.

During the launch of the BBI report at the Bomas of Kenya on November 28, 2019, President Kenyatta strongly cautioned against divisive politics urging political leaders not to mislead the public on the report.

He emphasized that the BBI report is meant to address some of the challenges facing the country such as unemployment, electoral violence, poverty and corruption.

However, soon after the launch of the report, political leaders began locking horns and exchanging words over implementation of the BBI report. On one hand, leaders allied to the pro-Ruto wing of the Jubilee Party popularly known as Tanga Tanga appear to be vouching for the Parliamentary route while their rivals are in favour of a referendum.