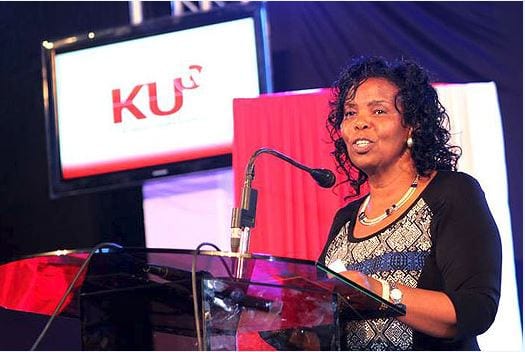 Former Kenyatta University Vice Chancellor Prof. Olive Mugenda has declined a Ksh 100 million send off package awarded to her by the institution as appreciation for her exemplary performance as she retires.

The university council had proposed the hefty package for Prof. Mugenda as a sign of appreciation in recognition of her impressive development record.

In a statement to newsrooms, Kenyatta University Director of Communication, Machua Koinange, confirmed that Mugenda declined the offer.

The statement adds that when Mugenda took over Kenyatta University as VC, she was discharging her public duties and did not accept the position with a retirement package in mind.

The benefits of the package included a 10 day holiday to a country of her choice in the company of a spouse or a friend at the cost of Ksh 2.5 million, a personal vehicle for Ksh 10 million.

Mugenda was also to get a retirement home in the form of a flat in a suitable residential area of her choice worth Ksh 20 million. The package was only to apply to her due to her unique and unprecedented contribution to Kenyatta University.

The ex-VC had dispatched the decline of the retirement package in a letter sent to the University Council on Friday.

“Mugenda is, however, grateful for the gesture and the support the University Council has given her during her tenure,” read the statement in part.

“Prof. Mugenda wishes the staff, students and management of KU a prosperous future and believes KU will only grow bigger and better with the foundation she has laid down for it.”

Mugenda left office Sunday after a decade at the helm.

The proposed hefty package had been greeted with outrage with a majority of Kenyans taking to social media to express displeasure of the University Council’s decision.

During her last official function (the opening of the Education Complex), at the university on Thursday, Mugenda dismissed claims by UASU (KU Chapter) officials saying the university had bought her a car for as a send-off gift.

“If the council feels the VC has done well why is UASU complaining? In fact they say I was given a car, can I actually get a car, what is wrong even if a VC is given a car?” she queried?

“They should not politicise these things and should let me go in peace. If I was to steal millions of shillings, I had the time to do so but I have not stolen a single cent from the university.”

Mugenda’s move to decline the retirement package comes a day after Council Chairman Ratemo Michieka on Saturday defended the package terming it as reasonable since it has to be approved by the Ministry of Education.

Meanwhile, Prof P. K. Wainaina, who has been Deputy Vice-Chancellor in charge of administration, takes office as the new Vice Chancellor.