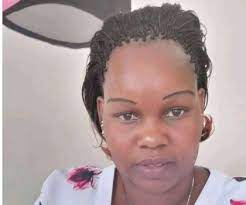 There was an unplanned meeting between the family of slain police officer Constable John Ogweno, 28, and the family of the woman accused of killing him Caroline Kangogo in Nakuru.

The two families met during a prayer service for Ogweno at the Kasarani Police quarters. Kangogo’s family was at the place to pick their daughter’s household items from her house.

No details on what was said in the meeting but it was described as “cordial”.

At the prayer service, Constable Ogweno’s family revealed that a post mortem on their son revealed that he died from a single gunshot to the head. He is survived by a widow and two children.

Speaking during a mass service at the Kasarani police quarters in Nakuru on Thursday ahead of his burial in Homa Bay on Friday, the family called for justice to be served.

Emotions run high as relatives and colleagues viewed the body of the slain police officer, many remembered him for his kind hearted spirit and his willingness to assist.

Kangogo captured the headlines for the alleged murder of two men – her colleague Constable Ogweno and businessman Peter Njiru Ndwiga and was on the run for days before she allegedly shot herself dead.

She is accused of shooting dead Ogweno on July 5. Sergeant Joseph Ologe reported to the Nakuru Police Station that he found Ogweno inside his car with blood oozing from his nose.

Sergeant Ologe said Ogweno’s car had broken windows and the engine still running and investigations revealed she could have been behind the act.

Hours later another man, Peter Njiru Ndwiga was reported to have been shot dead in Thika and Kangogo was placed at the scene which prompted the Directorate of Criminal Investigations to issue an alert.