Family of ex-Garissa Finance CEC accuses DPP, DCI of slowing down on case 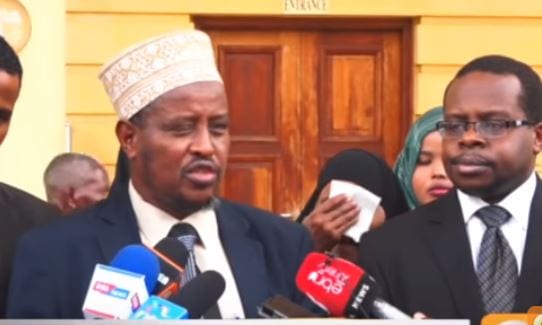 The family of a former Garissa County official who is fighting for his life after he was shot in the head is now accusing the Director of Public Prosecution (DPP) and the Director of Criminal Investigations (DCI) of not investigating the case further.

Aden Mukhtar, the father of Idris Mukhtar, while addressing the media at Milimani Law Courts on Wednesday, said the former Garissa County Finance CEC was flown to India for further specialised treatment but lamented on the investigations taking long.

“We do not have faith in the DCI, he has been influenced by some politicians,” said Mr. Muktar.

He said his son is still in a comma and that, according to the doctors, even if he recovers he will suffer permanent disability.

Mr. Mukhtar further pointed fingers at Garissa Governor Ali Korane over the shooting, adding that he will file a petition seeking to have him removed from office on the grounds that he has fake certificates.

According to the family lawyer Charles Kanjama, the degree the governor claims to have acquired from the University of Nairobi is not genuine.

Two people, Mohamud Aden and Juliet Njoki, were in September charged with the attempted murder of the ex-county finance boss as well as conspiracy to kill lawyer Charles Kanjama.

The suspects were accused of attempting to murder Mr. Mukhtar on August 19 and plotting to kill Kanjama between July 1 and September 27.

They denied the charges before Nairobi Chief Magistrate Francis Andayi.