Fighting fakes: Mobile phones the most counterfeited goods in Kenya 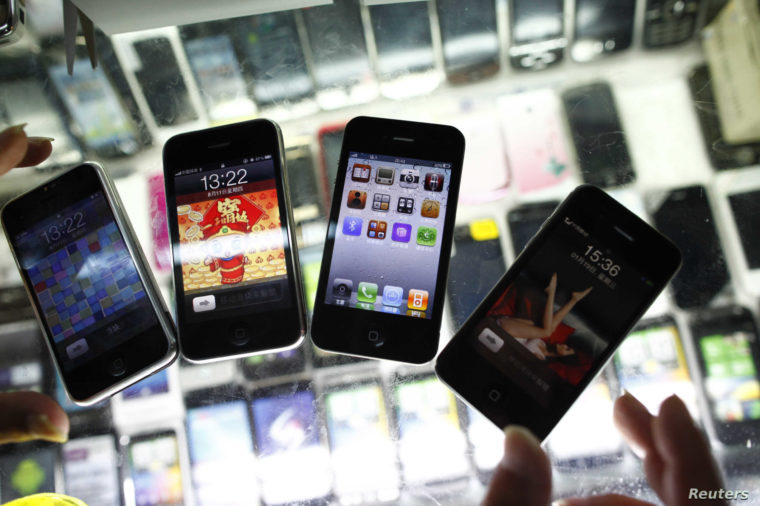 Kenya loses an estimated Ksh. 30billion every year in tax evasion, unlicensed goods and counterfeit, according to various studies.

The country is the largest market for counterfeits in East Africa with 40% of products sold in the market regarded as such.

Mobile phones still remain the most counterfeited goods in the country, accounting for half of those goods and sold. But how long can this continue and what are the impacts?

Ruth Akinyi and Mary Wairimu needed to buy phones, just like many other Kenyans: to make calls, send messages, send and receive money.

Kabambe or Mulika Mwizi are Swahili words for a basic phone; cheap, easy to use and most importantly, with battery charge that lasts longer than most.

But for many young people, a smartphone is more preferable and alluring.

“I bought this phone for Ksh. 500 (USD 5). It was for business. I have had it for two months. It has really been helping me. Everything is OK, even MPESA is OK,” Ruth says.

Mary Wairimu, a small scale trader has two handsets: a smart phone and a basic phone. She says that she didn’t know that the smartphone she bought was fake.

“I was told that it was an original phone and it was tested. When I went to use it, the first thing I checked like other ladies is the camera. The quality was not clear. The internal storage was not what I expected. It was supposed to be 16GB but when you install a few applications, you get an alert that the phone memory is already full,” she said.

According to the Anti-Counterfeit Agency (ACA), nearly 75% of Kenyans used counterfeit goods in 2019.

ACA estimates that about 1 in 5 products sold in major towns in the country are counterfeit: only 19% purchase the goods knowingly.

49% purchase the goods because they are cheap while 17.3% of Kenyan consumers were looking for original items but could not find them. 18.3%, were not aware of the risk.

According to Phyllis Wakiaga, the Chief Executive Officer of the Kenya Association of Manufacturers (KAM): “ Any illicit trade is trade carried out outside the laws of the country.Most of the time people involved in this trade are probably not paying their taxes in and out of the countries they are operating.”

Illicit Financial Flows is the movement of illegally acquired, transferred or spent funds across borders

According to the Kenya Association of Manufacturers and government data from 2019, every year as a result of illicit trade, Ksh. 200billion is lost as potential income.

Flora Mutahi , the former Chairperson of the Kenya Association of Manufacturers adds that in 2019: “Local manufacturers claim 40% of their market estimated at Ksh. 30billion is also lost to illicit trade. The government loses Ksh. 6billion annually as potential tax revenue.”

At the point of manufacturing and importation, counterfeit phones have different names; but when they are in the country’s distribution and retail chains, they are falsely branded and passed off as some of the most popular brands.

They are then priced lower to attract the unsuspecting buyers. Foreign investors cannot innovate into new product lines, because of the fear that their products will soon be counterfeited before reaching the targeted markets.

Bernard Kituku, a mobile phones trader in Nairobi buys his phones from stores in Luthuli Avenue.

“There is the copy and the original. The original is very expensive and the copy is cheap. These ones I am selling are from China. The phone’s battery is not original. All you need is to buy a new battery and the phone will be OK,” he admits.

Tom Mboya street and Luthuli Avenue in downtown Nairobi, have been identified as conduits for trade of counterfeit smartphones, especially from China.

A raid in the area in February 2019, uncovered a haul of counterfeit mobile phones worth Ksh. 8million.

Peter Mutula, an enforcement officer with the AntiCounterfeit Agency says the trade in counterfeit phones cannot be underestimated.

“Alongside importation of the phones themselves, there are more goods such as back covers, battery wrappers bearing logos fake screen covers, stickers and battery wrappers that are then used to repackage the phones as genuine and recognizable brands.Whoever is found with the phones is the one we will arrest.”

Unknown to many customers, components such as Lithium-ion batteries found in smartphones pose a grave risk to users and the environment given the high disposal rates in the case of counterfeit phones.

Kenya remains one of the top 5 smartphone markets in Africa. When smartphones are counterfeited, manufacturers lose revenue and brand loyalty following numerous cases of failed devices, just days after purchase.

According to a study by the EU Intellectual Property Office and the International Telecommunication Union (I.T.U) estimates, the smartphone industry lost Ksh. 4.8trillion worth of sales to counterfeits in 2015 alone.

The Organization For Economic Cooperation And Development (OECD) estimates that the East African Community (EAC) loses over US$500 million in tax revenue annually due to counterfeiting.

Here in Kenya, a manual developed by the Kenya Association of Manufacturers (KAM) ranked the country as the largest market for counterfeits in East Africa.

“A lot of the counterfeit goods are assembled here in the country. Parts are brought in and they are assembled. We cannot identify just one source market,” says Mwende Njiraini, the Manager in charge of Type Approval at Communications Authority of Kenya (CA).

On multiple occasions, both Chinese and Kenyan security and customs agents have seized counterfeit goods from China destined for the Kenyan market.

A United Nations report released in June 2017 ranked Kenya as a major fake pharmaceutical and veterinary drugs trafficking hub. Kenya was third after Nigeria and Benin in the 113 million illicit medicines seized in Africa worth Ksh. 6billion, most of them from China and India.

The Kenyan government has declared war against illicit trade. This can be broadly classified as : smuggling, counterfeiting, piracy, transit fraud and trade in prohibited or contraband goods.

Recent seizures of substandard sugar, as well as the circulation in the market of fake fertilizer, among other products, have caused the government to rethink strategies towards fighting illicit trade.

As part of the policy, regulatory, and legal framework, the government came up with the 2019-2022 National Action Plan To Combat Illicit Trade.

This will involve multiple agencies including: the Anti Counterfeit Agency; the Customs Department of the Kenya Revenue Authority; the Pharmacy And Poisons Board; Weights And Measures Department; Pest Control Products Board and other relevant government departments.

According to Wakiaga, one of the enablers of the illicit trade, is the  porous borders. “This continues to be a big challenge. We also do not have a harmonized  Intellectual Property Registration System for the regional cross borders.”

Wakiaga, who is also the co-chairperson of the Anti-Illicit Trade Executive Forum, says the biggest gap has been that the agencies have been working independently.

“We hope with the Multi-Agency ,there will be more synergy. For the seizures, the authorities should go beyond seizing from just the shops , but also a step from the shop, look at the source market, and deal with who is engaging in the trade,” she tells Citizen TV.

Counterfeit goods remain the biggest threat to local industries. Consumers like Ruth and Mary would no doubt make different purchases decisions if only they understood the link between what they buy and the country’s overall economy.

Many analysts believe that the multi-agency approach adopted by the government could bear fruit, if it addresses not just the consumer awareness problem, but also the corruption and loopholes in the system that facilitate the illicit trade.

This story was produced by Citizen Digital as part of Wealth of Nations, a media skills development program run by the Thomson Reuters Foundation in partnership with the Institute for the Advancement of Journalism. More information at www.wealth-of-nations.org. The content is the sole responsibility of the author and the publisher.