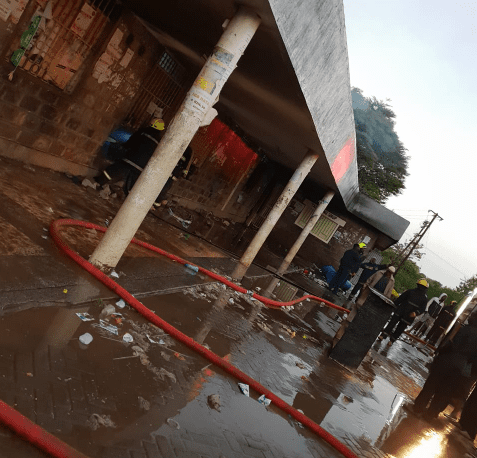 Students at Jomo Kenyatta University of Agriculture and Technology (JKUAT) main campus on Monday woke up to a fire at the institution.

The fire is reported to have broken out between 3am and 4am at the students’ cafeteria and tuck shops next to Hall 6 and was only fully contained at around 6:30am.

The school administration, led by Vice Chancellor Prof. Victoria Ngumi, reportedly arrived on scene at about 7:45am and addressed the students.

Prof. Ngumi stated that they are working on providing the students residing at Hall 6 hostels with alternative means of catering.

According to Mr. Boru, some of the items that were lost in the fire include printers, refrigerators and kitchen equipment.

The students’ body Secretary General Alexander Oucha added that the fire brigade arrived at the scene over an hour after the fire broke out hence the delay in containment.

He further stated that the brigade began by putting out the fire emanating from the kitchen section due to the presence of gas cylinders so as to avoid further spread.

The incident has now forced the institution to speed up the construction of a new students’ center which has been in the pipeline since last year and was scheduled for launch later in the month.

“We are now hoping the students’ center will be ready for launch before the end of this week since the cafeteria has been completely burnt down,” said Mr. Oucha.