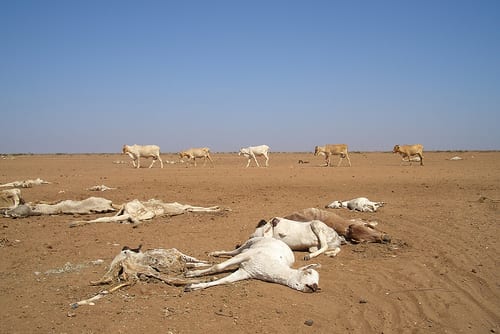 Livestock farmers in Samburu County are counting losses after an estimated 18,000 heads of livestock were swept by flash floods following a heavy downpour in the county.

Livelihoods are now under threat in an area that has suffered the blunt of drought that has left hundreds of livestock dead due to starvation.

Speaking to Citizen Digital on phone, area Member of Parliament, Alois Lentoimanga said that the most affected areas by floods are Nyiro, Ndoto, Elbarta, Nachola, Angata and Baawaa wards where households have also been swept away by the floods.

Lentoimanga is now appealing to the government and the Kenya Red Cross to intervene, describing the situation as dire.

According to Joseph Lekaato, a resident of Bendera village in Samburu North Sub County, this is the worst loss that has never been experienced in the region.

“We have lost millions of shillings after our cattle, camels, goats, sheep and donkeys died of hunger and now rainfall,” Lekaato said.

The affected residents are now calling upon county and national governments to increase relief food distribution in the region.

Lenadongor said relief food and elderly money that is being received in the village is not enough to satisfy the affected community urging well wishers and government to visit the area.

According to the Metrological Department, the months of May and June will be defined by heavy rainfall over several parts of the country.