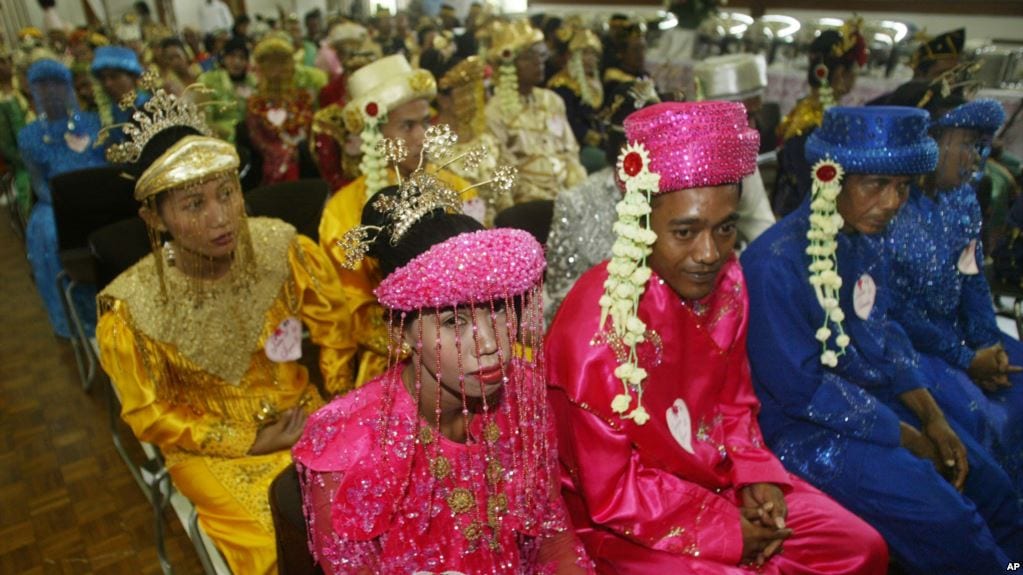 According to followers of a popular Indonesian social movement, the country would be better off without dating.

The group’s message seems to have touched a nerve, acquiring over 200,000 Facebook likes and over 300,000 Instagram followers to date. Its posts often draw from Islamic culture, mixing in content about hijabs, for instance, with anti-dating graphics.

“I was concerned about the younger generation, who are victims of the doomed culture of courtship,” Munafar said when asked why he started the movement.

While the anti-dating movement has grown here, there have been several high-profile, unusual marriages in local news: one between two middle school studentsand another between a 16-year-old boy and 71-year-old woman, both in Sumatra.

Though these stories are somewhat sensationalist, child marriage is a big problem in Indonesia. Between 14 percent and 35 percent of Indonesian girls marry before age 18, depending on the province, according to UNICEF. Some child welfare advocates worry that the movement to skip dating in favor of marriage will aggravate this issue.

He is 26, married, originally from Southest Sulawesi and currently lives in Yogyakarta. According to his website, he has written 60 books and runs a “quick-write” course that promises to generate a book manuscript with eight hours of training.

“Dating only wastes time, energy and money for a moment’s pleasure,” said Munafar. “It’s not for serious relationships or building a house.” Munafar claims the movement gains over 1,000 followers on social media every day.

As an alternative to dating, the group suggests ta’aruf, the Islamic cultural practice of getting to know prospective spouses, usually through family introductions.

And last year, conservative politicians proposed banning all extramarital sex. The nation’s highest court has not yet moved forward with discussion on the measure.

Indonesia Tanpa Pacaran has tried to lobby Indonesia’s ulama (religious scholar) council to issue a fatwa against dating, but its members have resisted so far, saying that fatwas ordinarily arise in response to specific incidents.

Indonesia ranks among the 10 countries with the most child brides. By law, girls can marry at age 16, while boys can only marry at 19 with parental permission. But younger girls or couples can often get away on the nikah siri loophole, which refers to marriage performed under Islamic law.

“Overall, the legal loopholes in Indonesia legitimize various forms of child marriage,” said Emilie Minnick, a child protection specialist at UNICEF Indonesia. “Once married through nikah siri, it is extremely easy to then go through formalization of the marriage through the process of isbat, meaning that there is little incentive to go through legal marriage channels. Furthermore, the issue of child marriage in Indonesia is compounded by the fact that many authorities are proceeding on the basis of forged identity documents, which give a false age.”

Child marriage has many negative effects on girls, Minnick said. “Girls who marry before 18 are six times less likely to complete secondary education than girls who marry after 18, poverty makes Indonesian girls four times as likely to be married before age 18 … and globally, complications during pregnancy and childbirth are the second leading cause of death for girls ages 15 to 19,” she said, citing figures from Indonesia’s Central Bureau of Statistics.

Cultural pressure to skip dating is certainly not the only factor in child marriage. Poverty, cultural norms and lack of social services also play a role. But the movement seems to be symptomatic of the cultural environment that produces the practice.