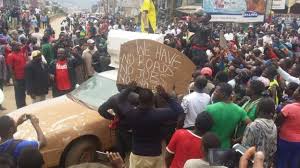 Cameroon’s government said on Sunday that separatists in its restive English-speaking region had detonated an improvised explosive device that killed four police and wounded six.

“The government condemns in the strongest terms this criminal act, perpetrated by armed bandits and terrorists with no faith or law,” the statement said. It also said the attack occurred along a road near the district of Eyumojock in the south west of the country late on Saturday.

There was no immediate reaction or claim of responsibility from any separatist group.

What began as peaceful protests in Cameroon’s southwestern Anglophone region in 2017 have degenerated into near daily violence between the forces of Cameroon’s mostly French-speaking government and several separatist groups.

The English-speaking Northwest and Southwest of the country complain of being marginalised by the French speaking majority.

It is rare but not unheard of for the separatists to use bomb technology, but this would mark their first deadly strike using a bomb.

The attack came after both sides claimed to be open to dialogue, which rights groups doubt will happen under current conditions.. Prime Minister Joseph Ngute has said the government would be willing to talk to the rebels, but would not consider their demand for secession.

Eleven movements representing Anglophone Cameroon, including the main armed factions, last month said they were willing to enter mediated discussions with the state.

Cameroon’s linguistic divide has existed since the end of World War One, when the League of Nations divided the former German colony of Kamerun, in central Africa, between allied victors, leaving most of Cameroon French-administered but a small part run by Britain.