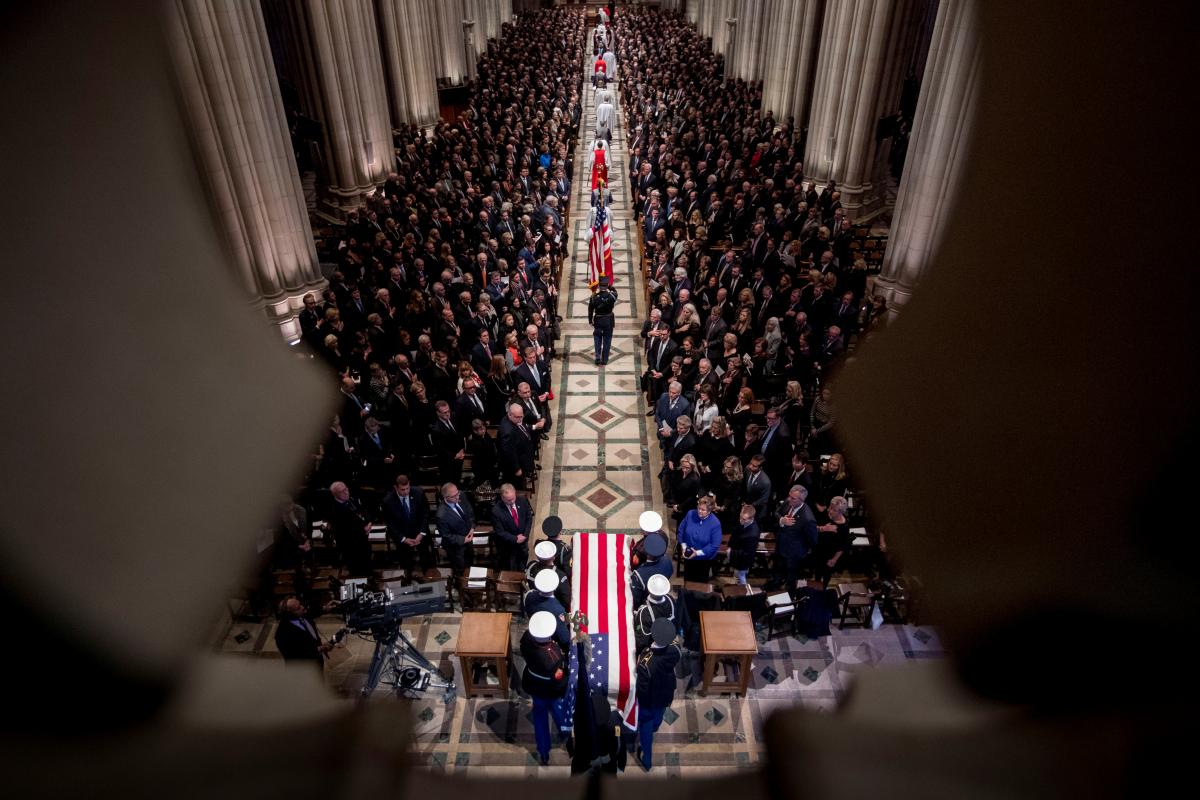 The late President George H.W. Bush was hailed at his state funeral on Wednesday as a World War Two hero, Cold War veteran and architect of a U.S. victory against Iraq who went on to represent a bygone era of civility in American politics.

Amid an unusual bipartisan spirit at the service at the Washington National Cathedral, both Republican and Democratic politicians honored a president who called for a “kinder, gentler” nation.

Bush, the 41st U.S. president, died last week in Texas aged 94. He occupied the White House from 1989 to 1993, and navigated the collapse of the Soviet Union and expelled former Iraqi President Saddam Hussein’s forces from oil-rich Kuwait.

The capital’s current political feuds were briefly set aside in honor of the late president, a naval aviator who survived being shot down by Japanese forces over the Pacific Ocean in World War Two, and former head of the CIA.

President Donald Trump shook hands with his predecessor, former President Barack Obama, who he has often sharply criticized, as he took his seat at the cathedral.

Trump, like Bush a Republican, infuriated the late president by attacking his sons, former President George W. Bush and Jeb Bush, one of Trump’s rivals in the 2016 Republican primary campaign.

George W. Bush said his father “valued character over pedigree, and he was no cynic. He’d look for the good in each person, and he usually found it.”

“The best father a son or daughter could ever have,” the former president said in his eulogy, his voice cracking with emotion.

The late president has been remembered as a patrician figure who represented an earlier era of civility in American politics.

He was voted out of office in part for failing to connect with ordinary Americans during an economic recession. But his reputation for moderation and politeness has shone more brightly in recent years in light of the divisiveness and anger in the United States that accompanied the rise of Trump.

“When George Bush was president of the United States of America, every single head of government in the world knew that they were dealing with a gentleman, a genuine leader, one who was distinguished, resolute and brave,”

Bush put together a U.S.-led international coalition that ousted invading Iraqi forces from Kuwait in 1991.

Trump tweeted on Wednesday that he was “Looking forward to being with the Bush family. This is not a funeral, this is a day of celebration for a great man who has led a long and distinguished life. He will be missed!”

All surviving former U.S. presidents were at the cathedral along with their wives.

The guest list included Britain’s Prince Charles and leaders of Germany, Jordan, Australia and Poland, along with a host of former world leaders, such as former British Prime Minister John Major, who was in office during Bush’s term.

Trump closed the federal government on Wednesday to mark a day of mourning for Bush, and several U.S. financial exchanges were closed.

Bush, who had been President Ronald Reagan’s vice president, was president when the Berlin Wall fell in 1989.

He was dogged by domestic problems, including a sluggish

economy, and faced criticism for not doing enough to stem the tens of thousands of deaths from the AIDS virus ravaging America.

When he ran for re-election in 1992, he was pilloried by Democrats and many Republicans for violating his famous 1988 campaign promise: “Read my lips, no new taxes.” Democrat Bill Clinton coasted to victory.

Hundreds of people lined Pennsylvania Avenue in downtown Washington to watch a hearse drive Bush’s coffin from Capitol Hill, where he had lain in state since Monday night, toward the cathedral on Wednesday morning.

Thousands of people had filed past Bush’s body to pay their respects in the Capitol Rotunda, some getting a chance to see Sully, a service dog who was Bush’s friendly companion. Sully became an internet sensation after being photographed lying next to his late master’s coffin.