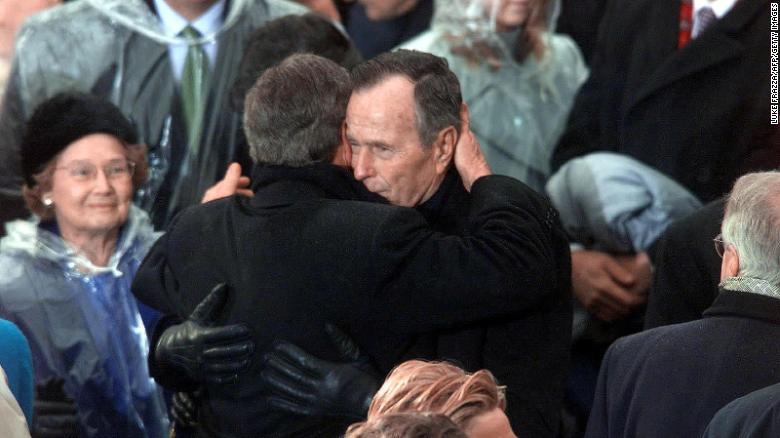 Former President George H.W. Bush will be eulogized by his son, former President George W. Bush, along with a mix of family and friends on Wednesday at the Washington National Cathedral, the most high-profile event in a week of proceedings that will remember the remarkable life of the president who died on Friday at 94.

Along with his son, George H.W. Bush will be eulogized by former Canadian Prime Minister Brian Mulroney, whose time in power overlapped with Bush, former US Sen. Alan Simpson, who became a close friend to Bush, and presidential historian Jon Meacham, the late president’s biographer.

President Donald Trump will not speak at the funeral, sources with knowledge of the plans tell CNN, but has said that he will attend Wednesday’s memorial. Despite the fact that Trump’s rise to power included lambasting past presidents, including both Bushes, the President has responded to Bush’s death with repeated laudatory comments.

The plans for Bush’s funeral were all put into place before Trump was ever elected, sources tell CNN. Presidents are traditionally asked to eulogize presidents who have died — and in past state events like this, that has been the case — but the Bush family is unlike any other and has another president in the family who will fill that role.

Trump will pay a condolence call to the Bush family on Tuesday at Blair House, according to the sources, a government house across the street from the White House.

As of Monday morning, all living Presidents are expected to attend Bush’s funeral on Wednesday at the Washington National Cathedral.

Bush’s passing has led to an outpouring of remembrances for the humble and gentlemanly statesman, whose life and service was seen to stand in direct contrast to the vitriol and partisanship that has enveloped elected politics in recent years. Many have also heralded Bush’s 73-year marriage to his wife, Barbara Bush, who died months before her husband in April 2018.

Those reflections will continue throughout the week, when Bush’s casket travels from Houston, Bush’s hometown, to Washington, DC to lie in state in the United States Capitol. Trump directed the presidential plane — called Air Force One when the sitting President is aboard — to pick up Bush’s casket and transport it to Washington.

“We’ll be spending three days of mourning and three days of celebrating a really great man’s life,” Trump said in Argentina where he was attending the G20 summit. “So, we look forward to doing that, and he certainly deserves it. He really does. He was a very special person.”

Bush will lie in state until Wednesday morning when his casket will then be transported to the National Cathedral for the first of two funeral services for the former president.

Vice President Mike Pence will offer brief remarks Monday at the evening ceremony at the Capitol before the public can visit the president lying in state. It is anticipated that foreign leaders will also be paying condolence calls to the family on Tuesday.

On Thursday, Bush’s casket will travel back to Houston, where he will be memorialized at St. Martin’s Episcopal Church and eulogized by his grandson, Texas Land Commissioner George P. Bush, and former Secretary of State James Baker, a man who has been by Bush’s side since the former president’s failed 1970 Senate campaign in Texas.

Members of the family, including children and grandchildren, will be taking part in each service.

Bush’s personal relationship with his Secret Service details will also be on full display throughout the week of events. The detail, made up of agents who enjoyed a close relationship with the former President, will be with him until he is interred and in the second vehicle in the motorcades that will lead to all the ceremonies.

Some of the agents will also act as honorary pallbearers in Texas at the funeral home and Ellington Field, where Bush will begin his final flight back to Washington, DC.

The honorary pallbearers in Washington — for both Bush’s entry into the Rotunda and the National Cathedral — will be Navy captains and admirals who have commanded the USS George H.W. Bush and members of the carrier strike group.

Bush’s death has also led to a series of symbolic moments.

Bush had come to be known in recent years for his colorful and symbolic use of socks, wearing different pairs to express his mood or mark occasions. Jim McGrath, Bush’s spokesman, tweeted on Monday that the 41st President “will be carried to his final rest wearing socks that pay tribute to his lifetime of service, starting as an 18 year-old naval aviator in war.”

McGrath also tweeted a photo of Sully, Bush’s service dog, laying in front of the late President’s casket on Sunday night with the caption, “Mission Complete.”

Sully is named after former airline pilot Chesley B. “Sully” Sullenberger III, who became famous for landing a damaged passenger jet on the Hudson River and saving all 155 passengers and crew in 2009.

Following the week of services, Bush will be laid to rest on his presidential library grounds at Texas A&M University, where his wife and Robin, his daughter who died of leukemia in 1953, are buried.