Get Up, Stand Up! UNESCO declares reggae a global cultural treasure 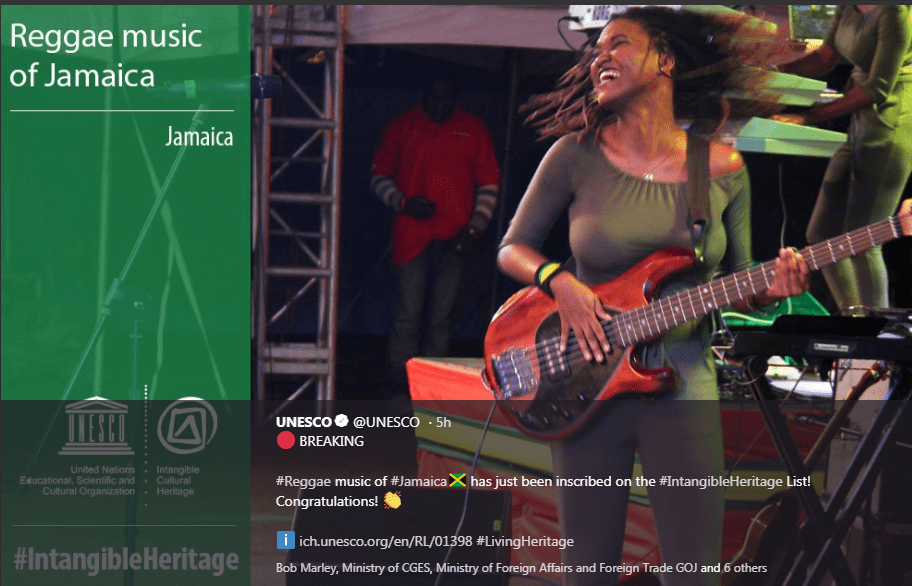 UNESCO has declared reggae, the Jamaican music that spread across the world with its calls for social justice, peace and love, to be a global treasure that must be safe-guarded.

Born in the poor neighborhoods of Kingston in the 1960s, reggae reflected hard times and struggle but could also be joyous dance music with its distinctive off-beat.

Its most famous songwriter and performer, the late Bob Marley, became a global superstar with hits like “No Woman, No Cry” and “Get Up, Stand Up”. Other notables include Jimmy Cliff and Toots and the Maytalls.

Artists such as the Clash incorporated its chunky beat and its politics into their own music, bringing it to a wider audience. It caught on from Britain to Brazil and Africa.

“Its contribution to international discourse on issues of injustice, resistance, love and humanity underscores the dynamics of the element as being at once cerebral, socio-political, sensual and spiritual,” UNESCO said in a statement.

The Paris-based UNESCO, the cultural agency of the United Nations, made its ruling at a meeting this week.

Jamaica applied for reggae’s inclusion on the list this year at a meeting of the UN agency on the island of Mauritius, where 40 proposals were under consideration.

Reggae was competing for inclusion alongside Bahamian strawcraft, South Korean wrestling, Irish hurling and perfume making in the southern French city of Grasse.