Godec reacts to Trump decision to oust him 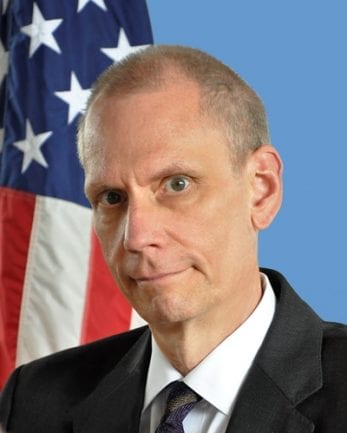 Robert Godec has welcomed the decision by President Donald Trump to replace him as U.S. Ambassador to Kenya.

In a statement sent to newsrooms on Thursday, Mr. Godec said he would continue to serve the country in his capacity as envoy until the Senate approves the nomination of his successor Kyle McCarter.

“One of the greatest privileges of my life has been to serve as the U.S. Ambassador to Kenya and to help deepen the special relationship between the two countries,” he said.

According to him, the United States and Kenya have achieved a great deal during his 5-year tenure and he is confident that progress will continue to be made in areas such as healthcare, security, governance among others.

Mr. Godec was nominated as U.S. envoy to Kenya in 2012 by the then President Barack Obama.

“Kenya holds a special place in my heart. I offer a warm Asanteni Sana to the Kenyan Government, Kenyan people and my embassy colleagues,” he added.

Responding to Kenyans online who applauded Trump’s decision to replace Godec, British Ambassador to Kenya Nic Hailey said: “Trolls gonna troll/haters gonna hate. But no one who has met my fellow Balozi @BobGodec could question his deep and untiring commitment to Kenya, the Kenyan people and the values and institutions that make Kenya strong. He will be missed.”

The White House announced the nomination on its website on Wednesday evening.

Last month, President Trump fired U.S. Secretary of State Rex Tillerson while he was on a visit to Kenya. He made the announcement on Twitter forcing Mr. Tillerson to cut short his trip saying that he was unwell.