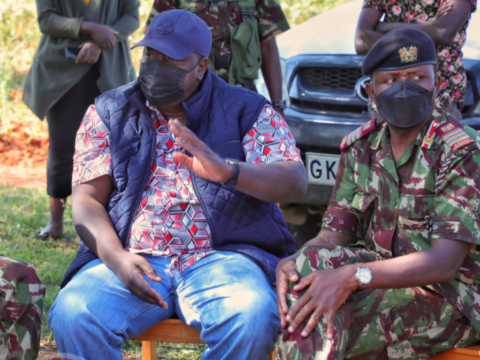 In apparent warning shots to bandits and other armed groups across the country, the government has turned the ongoing security operation in Laikipia into a platform to showcase its might by deploying rarely seen weaponry.

For months, heavily armed bandits have visited death and destruction on the fertile lands of Ol-Moran, forcing hapless residents to flee for dear lives.

The brazen attacks have appeared to mock the government’s tough talk and ultimatums to the invaders to cease fire and leave the area.

The plight of internally displaced citizens has moved the nation to demand action. That and the fact that security chiefs needed to send a strong warning to politicians rearranging electoral arithmetic through forced displacement of communities from regions of interest.

After several warnings, a government with a point to prove has finally swung into action.

The deployment has been heavy; from the sheer number of boots, the area feels like a war zone. The array of visible weaponry in the hands of tough-looking officers is scary.

They are sophisticated, they only have one assignment; to flush bandits in Ol-Moran area, Laikipia County.

And it seems to be working. Within a short time, calm has been restored after the bandits laid siege in the villages around Laikipia Nature Conservancy.

When the attacks escalated, quickly, the government deployed the National Police Reservists, the Rapid Deployment Unit, the Anti-Stock Theft Unit, the General Service Unit (GSU) and the Administration Police. Their job was simple, kick out the bandits with zero option.

The M-RAP is an all terrain frontline vehicle, it is capable of maneuvering its way to remote bandits hideouts. It can find its way through the thickets and with its bullet proof armor, it is able to create a buffer to repulse potential attackers.

An Armored Personnel Carrier (APC) is also critical in the ongoing operation. It accesses all terrains with a 360 rotation shooting design—this is used to silence the attackers always hiding in the thick forests.

Top security officials describe the strategy being implemented in Ol-Moran as a smart deployment that pays particular attention to the timetable of attacks preferred by the bandits.

Officers deployed to the frontline have full fighting webbings that comprise of extra magazine holders and pistols.

State of the art weapons were also on display in Ol-Moran; the HK21 belted is largely in the operation frontline. One single bullet belt contains upto 200 ammunition. The weapon is effective in confusing the bandits and to pin them down.

The AK47 assault rifle is also in the frontline to silence the bandits, as well as G3 rifles added to the strategic deployment.

But, on the other side, the bandits seem equally armed and determined to fight.

According to government assessment, the bandits in their midst have M16 rifles, with seemingly a constant supply of bullets to attack and cause mayhem.

But even as calm is restored in the area, the government says it will establish an elite squad training in Ol-Moran.