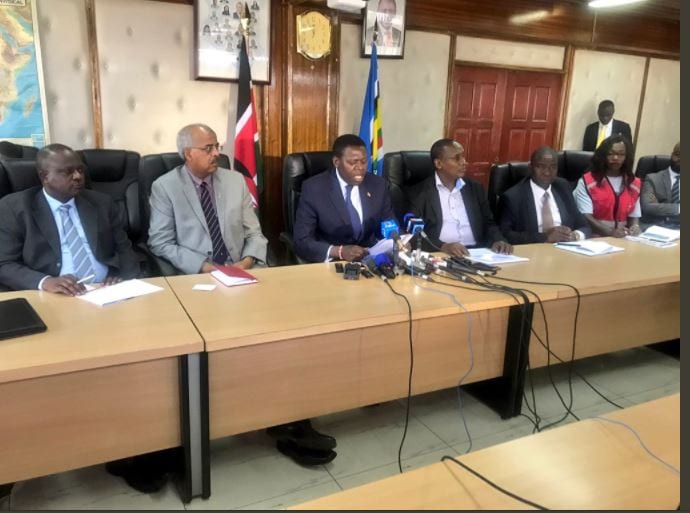 The government has set aside Ksh.4 billion to help the effects of drought currently affecting 3.4 million Kenyans.

Addressing journalists on Friday, Devolution CS Wamalwa said that the government has set aside Ksh.2.5 billion for relief food and cash transfers, Ksh.306 million for water tracking and Ksh.6.9 million for livestock off take to mitigate the effects of the ravaging drought.

Mr. Wamalwa stated that Isiolo, Kajiado, Tana River and Garissa are the counties most affected by the ongoing drought.

According to CS, the ministry has categorized arid and semi-arid counties into three as it begins to distribute relief food to affected counties .

The four counties belong in the first category.

“We have prioritised the four counties because these are regions that need the government’s immediate intervention. The drought is at its highest in these areas,” said Wamalwa.

The CS noted that in these counties, the drought has caused stress but not as severe as in the first four.

“We are also monitoring these counties very closely. There will be interventions to ensure that we have enough food water,” said the CS.

“The government is committed to ensure that no life is lost as a result of the ongoing drought. We are going to do our best to ensure that we bring relief to those Kenyans who are affected,” said the CS.

Wamalwa was flanked by Red Cross Secretary General Abass Gullet who lamented that the country is no longer receiving aid like it did some few years back because of its new status as a middle income country.

“This drought was declared a national disaster last February. The situation has worsened but no one has died. We have a lot of resources in this country the only problem is how we manage them. Kenyans have also helped their counterparts in ASAL regions and I am happy to announce that Kenyans are our biggest contributors,” said Gullet.