Governor ‘chases’ journalists from the county 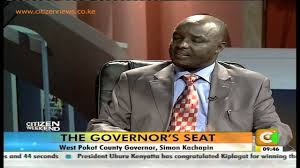 West Pokot Governor Simon Kachapin is under fire for ordering for immediate transfer of all journalists working in his county over what he termed as negative reporting about his administration.

Governor Kachapin is reported to have called the various media houses and asked for the immediate transfer of their correspondents from West Pokot.

He argues that the correspondents have been reporting negatively about his county and therefore tainting his image and that of his government.

Speaking on Tuesday, outside his office Kachapin said that journalists working in the county have been misrepresenting facts and painting the county in a negative manner pushing away investors.

Kachapin, who was handing over medicine worth Ksh 32 million to the department of health, said correspondents based in the county have been concentrating on corruption, cattle rustling and retrogressive cultural practices.

The move came after journalists requested the Governor to comment on corruption allegations raised against his government.

“Some of them are not even well off and they can also take a bath in the river like ordinary residents yet they portray our people as backward.”

Kachapin noted that he had liaised with editors of the media houses in Nairobi and asked them to transfer them (correspondents) to other areas.

He singled out a story that was aired in one of the media houses last month exposing men and women bathing together in the open.

“How can you continue marginalizing this county? Those taking their time to cover such stories should move to other counties,” irritated Kachapin said.

He accused journalists of soliciting for bribes yet paint the county in a negative picture.

“This is your profession and you must report what is right,” he added.

Kachapin cautioned journalists who are not ready to cover him not to attend any of his functions.

“If you don’t want to cover me, just stay because we have no money to bribe you.”

He added that he was investigating three notorious journalists who are always highlighting the negative stories from the county.

A journalist who sought anonymity said that their lives were in danger after allegedly receiving death threats from an unknown people.

“How can you cover stories if your life is in danger?”

Kachapin’s statement, adds to the growing scathing attacks on journalists by political leaders over what they term as “poor coverage”.

President Uhuru Kenyatta and his Deputy William Ruto have also been accused of attacking the media and threatening its freedom on several occasions.

In one of his public rallies, President Kenyatta and Ruto downplayed the importance of newspapers saying they are only useful in wrapping meat.

The attacks were castigated by the media’s constant pointer on the growing discontent among the public to the Jubilee government.

The National Assembly has also been on the forefront in taming the media with controversial bills that sought to hold journalists individually responsible for any incidences of defamation.

The Kenya Information and Communications (Amendment) Billwas passed by the National Assembly amid protests from media groups, journalist bodies and civil society.

The Bill proposed transfer control of institutions which can punish journalists and their employers from the National Assembly to the Executive and the Presidency.

President Kenyatta later called for consultation on the matter and returned the bill to National Assembly for revision.

The bill was signed into law in December 2013, still with some contentious issues including a Ksh 20 million fine to media houses and Ksh 5 million fine for journalists for reporting considered defamatory.

By Collins Shitiabayi / Written by Jemimah Gathoni and Benjamin Wafula