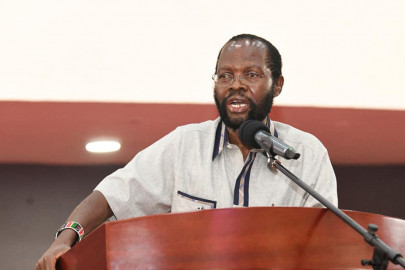 Kisumu County employees have been given two days off duty in order to register as voters ahead of August's polls.

Kisumu Governor Anyang Nyong'o said in a post on Facebook that he had also urged them to mobilize friends and family to exercise their civic duty.

"Currently meeting my county staff to have a conversation with them on the future of this county and country. We are also taking advantage of this opportunity to sensitize our people on the importance of voters listing," Governor Nyong'o said.

"It's a civic duty for all Kenyans to register as voters to enable them to exercise their democratic rights during the forthcoming August General Elections,"

He has reiterated the need to increase the registered voter numbers and expressed optimism in a higher voter turnout by the end of week.

"I would like all ministers and Chief officers to go back to their home areas and report to their ward administrator...," he said in the meeting with the county staff in Kisumu.

"We must improve these figures, the IEBC is ready to bring those kits there. By the end of this week we should see a better number than what we have now."

The Independent Electoral and Boundaries Commission (IEBC) kicked off its second phase of the Enhanced Continuous Voter Registration on January 17, an exercise marked by a low turnout.

The IEBC hopes to register 4.5 million voters in its second,  21-day round.

The exercise, second and last before the polls will also see the registration of Kenyans living in the diaspora.

Countries that have been included in diaspora registration and voting include; the United Kingdom, Canada, United States, South Sudan, Qatar, UAE and Germany.

Diaspora registration will be conducted during official working hours in embassies and consulates in the said countries.