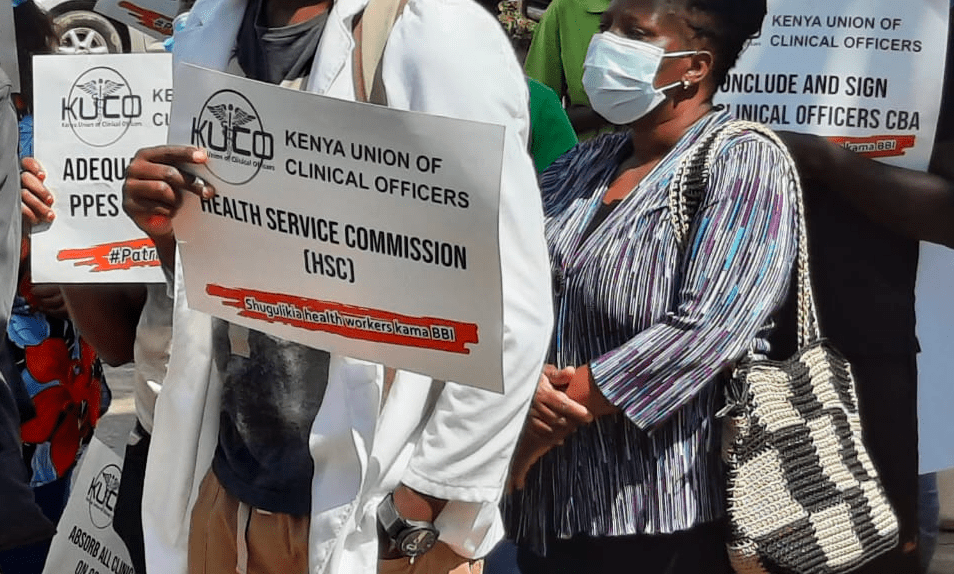 Governors have threatened to sack all striking nurses and clinical officers should they fail to resume work immediately.

In a press briefing on Wednesday, the Council of Governors warned the striking health workers that their strike was not protected in law and therefore illegal, and could result in mass layoffs.

The governors maintained they will not and cannot pay the health workers since they do not have the resources.

Already a number of counties have issued their striking health workers with show cause letters for absconding duties and went further to withhold their salaries.

“No worker should expect to walk out of their jobs and then walk back when they so wish – the county governments are not a revolving door…,” said CoG Chairman Wycliffe Oparanya.

During a session with media stakeholders, Oparanya said though they were willing to dialogue with the medics unions and find lasting solutions to the perennial strikes that often disrupt service delivery, devolved units are cash strapped.

“Counties shall not commit to any allowance not factored in their budget as this will be a trigger for future industrial arrest because they will not be able to pay,” added Oparanya.

And with the standoff persisting, the Mutahi Kagwe-led Health Ministry says it has played its part, throwing the hot potato the governors way.

“We will not interfere, we cannot in law tell a county government whether to hire or fire its workers let alone health workers,” said Kagwe.

Among the issues in contention which governors have disputed include the doctors’ risk allowance which clinical officers’ union claim require a minimum increment of between 500 per cent and 650 per cent for low cadres.

The others are include enhanced comprehensive group life cover and the conversion of contracts to permanent and pensionable terms. The Governors, however, maintain that implementing these demands will have huge financial implications which have not been factored in the budget.

“We are aware that an increase in any allowances has a budget implication to the counties, this requires the necessary approvals by the SRC and commitment by the National Treasury that they will provide these resources to the county governments,” stated CoG Chairman Oparanya.

The council revealed that in 2017, counties had spent a total of Ksh.5.3 billion to cater for the healthcare workers allowances’ yet other public officers had not received such.

Oparanya implored the healthcare workers to allow the multi-agency conciliation committee that was constituted by the Ministry of Labour to mediate and broker a deal.