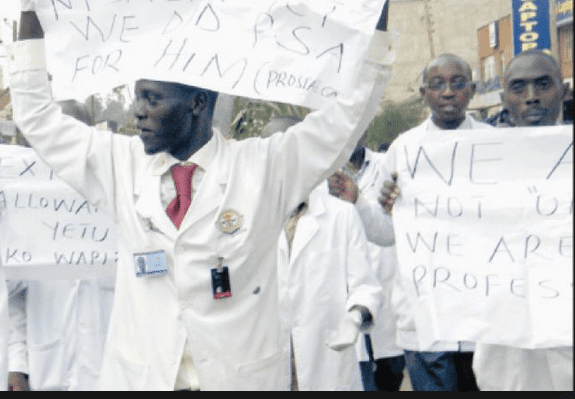 The Central Organization of Trade Unions (COTU) Secretary General, Francis Atwoli, now blames the government for the ongoing nurses’ strike, saying that the Jubilee administration has neglected its mandate in ensuring labor disputes are settled amicably without hurting Kenyans.

According to Mr. Atwoli, officials in the Ministry of Labor have not taken any measures to indicate their willingness to end the 49-day industrial action and that they are concerned about the common mwananchi who cannot afford healthcare in private facilities.

Speaking on Friday, July 21 during the COTU and National Hospital Insurance Fund (NHIF) workshop in Naivasha, Atwoli called upon Labor Cabinet Secretary, Phyllis Kandie, and officials in her Ministry to find a lasting solution to the ongoing strike that has paralyzed the health system in the country.

“Government is not about politicians but senior officers including Cabinet Secretaries who wake up daily to go to work but have failed to do their mandate. Previous strikes have been solved through a tripartite meeting comprising COTU, federation of Kenya Employers and government but the government side has failed Kenyans,” said Atwoli.

“We are not seeing massive campaign efforts to stop the disease from spreading, no education is being done and we are yet to see officials spraying areas where it was first reported,” said Dr Oluga.

Oluga has called upon the government to absorb close to 1000 intern doctors into the service in order to bridge the gap of shortage of medical professionals.

“This will only require about Ksh 1.3 billion annually and if the government is serious in bridging the gap, the interns should be hired immediately instead of looking for doctors from Tanzania and other areas,” added Oluga.