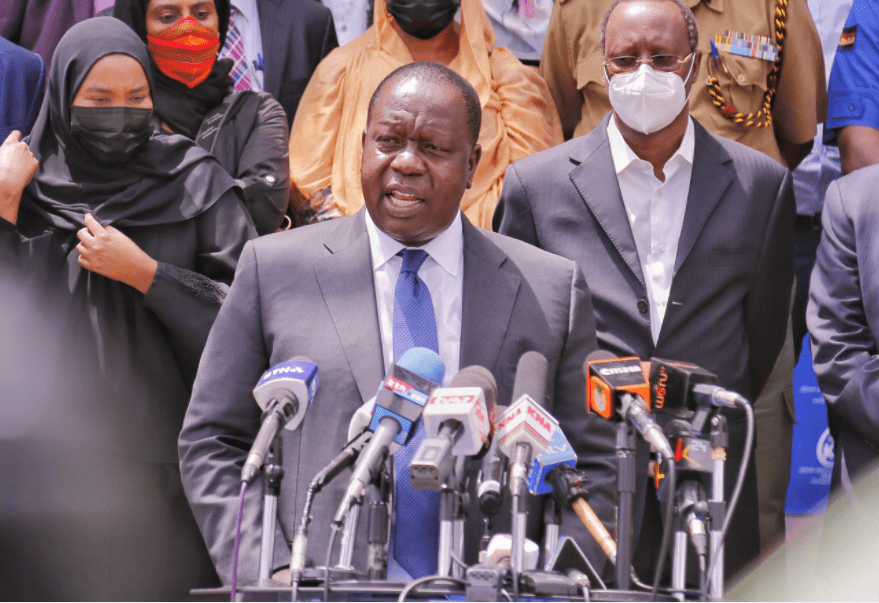 Interior Cabinet Secretary Fred Matiang’i on Monday announced that a 6pm-6am curfew will be imposed in Kapedo and surrounding areas to quell recurrent incursions and rising tension along the Baringo-Turkana border.

Matiang’i also announced that the government has resolved not to de-escalate security operations in the area until armed bandits are conclusively dealt with and illegal firearms seized.

The chaotic situation in Kapedo is however now evolving into a humanitarian crisis with 2,500 families affected according to the Kenya Red Cross.

The second week of a security operation in Kapedo and several families are now staring at severe hunger, lack of medical supplies and constant threat of injury and even death as security personnel deployed in the area engage in gun battles with armed bandits who have thrived with grim persistence for decades.

Residents of Kapedo, Lomelo, Napeitom and Kamuge are in what is virtually a lockdown as security personnel have sealed the area in the ongoing operation to flush out armed bandits.

Security forces and bandits who understand the geography and the terrain of the area have clashed since early last week when an Armoured Personnel Carrier (APC) was burnt by gunmen in an ambush in Kasarani area, Turkana County, and GSU operations commander Emadau Tebakol murdered.

“Those thugs killed 42 of our police officers, later on they killed 21 officers and recently they murdered more…we cannot continue to play hide and seek with criminals,” said CS Matiang’i.

The Interior CS added that there will be no room to entertain the criminality going on in Kapedo, insisting that the operation will not be de-escalated and instead will continue until the armed bandits are dealt with conclusively.

“We will sort it out once and for all…and I made it very clear when the leaders of that region came to see me last week, I told them that we will sustain the operation in that area until we get all the criminals out and we’re going to disarm the people who are there, it is the responsibility of government to behave that way,” he said.

“We have postponed that problem for a long time, it manifests itself as a cattle rustling problem but clearly it is a criminal activity that is supported by some groups of people in that region,” stated the CS.

At least 10 people have been murdered in two weeks with the Kenya Red Cross estimating that 2,500 families have been affected.

Political leaders from the area, among them Tiaty Member of Parliament William Kamket and Silale ward representative Nelson Lotela have been questioned on the conflict in the area even as the crisis in Kapedo unfolds.