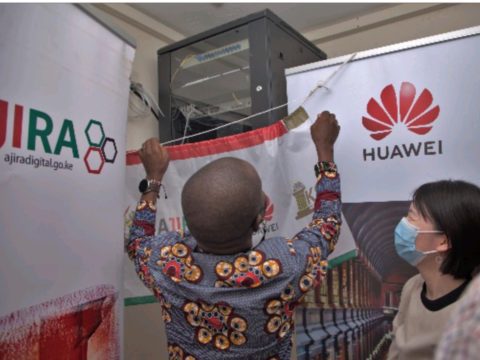 ICT Cabinet Secretary Joe Mucheru has announced government plans to increase the number of youth innovation centres across the country in a bid to have more youth working online and earning a decent income.

Through the Ajira initiative, CS Mucheru says the government intends to increase the number of youth working online from the current 1.2 million to 15 million by 2030.

He was speaking when he visited the KSG-Youth Innovation Center in Isiolo, which is supported by the UN, the County Government and technology giant Huawei, to unveil upgraded internet at the centre.

“With the digital age, comes many opportunities for those who are technologically savvy. Today we have 1.2 million youth working online earning decent wages in the gig economy. Our aim is to push this figure to over 15 million by 2030.

Through the national fiber optic cable my Ministry has connected this centre to super high-speed internet and these speeds are now more than 100 mbps and so private sector such as Huawei Technologies have connected equipment for you to be able to access this speed through wi-fi. I congratulate them and I thank them,” said CS Mucheru.

As part of its Ajira initiative, the Ministry of ICT has connected the Isiolo innovation center to the National Optic Fibre Backbone (NOFBI), a super high-speed government fiber network that reaches all the sub-counties in Kenya, so that the Center has high-speed internet.

Huawei has sponsored the internet equipment that connects to NOFBI so that there is complete coverage of Wi-Fi throughout this impressive center, covering the training rooms, the IT room, the outdoor area, and the offices. The speeds are now more than 100 mbps thanks to the cutting-edge outdoor and indoor Wi-Fi access points using the latest Wi-Fi 6 technology.

The Center was launched in late 2020 with funding from the UK government through UNDP. Through the support of KSG and Isiolo County the Center has rapidly scaled up its programmes with training benefitting youth from all 10 wards of Isiolo covering film, agribusiness, entrepreneurship, technology and social activities including drama, dance, and martial arts.

Speaking during the visit, Dr Stephen Jackson, UN Resident Coordinator said: “This Youth Innovation Center is investing in young people as our future. It is capitalizing on the immense possibilities for the creation of productive employment, decent work, innovation, entrepreneurship, improving livelihoods, reducing poverty and I just want to congratulate you all.”

Governor Kuti of Isiolo County highlighted the importance of the internet to the success of the Youth Center saying: “There is availability of Wi-Fi, thanks to Huawei. The youth are able to know what is going on the world and they are able to participate in AGPO and everything.”

On his part, Mohamed Ali, the United Nations Volunteer running the Center, noted that the upgraded internet has made a big difference with so many youth using the internet.

“Every day youth are able to use the Computers to study online and work online, and they have been actively participating in the Ajira online trainings as well as online trainings from Google and Alison, and finding jobs through the Ajira platform to earn money,” he said.

The Youth Center organizes a digital literacy training course to get them the skills they need to be able to use those devices, and the internet.

Over 80 youth have completed that course and there are 20 more currently enrolled. There are also plans to start coding classes in the near future.

Meanwhile 2 of the trainers at the centre have been trained by Huawei online on security and received certificates during the event to provide certified HCIA training.