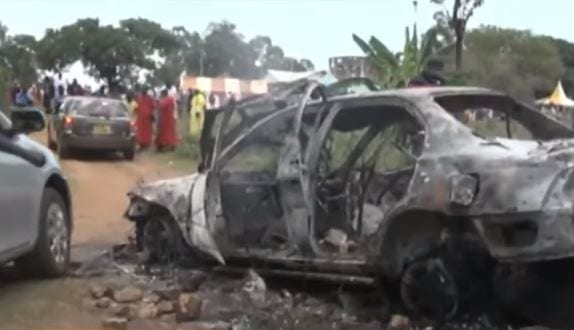 Police have closed the Got Kwer shrine in Migori County following a deadly clash between two factions of the Legio Maria faith on Monday that left four people dead.

Chaos marred the last day of the annual memorial ceremony of the founder of Legio Maria, Pope Melkio Ondeto after the factions claiming leadership of the church locked horns.

Tensions began shortly after Pope Raphael Adika arrived at the holy hill with his followers from Amoyo which they refer to as Jerusalem.

Adika and his followers received a hostile reception by followers of the church’s splinter group that is now headed by self-anointed Pope Laurence Kalul.

They stoned his convoy burning down one of the vehicles and injuring several people forcing police to intervene.

The leadership row in the Legio Maria sect has lasted for over 10 years resulting in division of the church and constant bickering.

The case to determine the legitimate leader of the denomination is to be determined later this month. The fight between Popes Adika and Kalul started after the death of Pope Romanus Ong’ombe.

For close to five hours, the small hill in Suna West, Migori County that is equivalent to the biblical Mount Calvary to Lego Maria followers, was a battle field for the soul of the church.

The place they call heaven; a place of peace and solace, turned violent. Lives were lost and many injured. Blood and spent cartridge littered the holy hill as screams and cries filled the air.

Speaking to the media for the first time since the incident, pope Kalul condemned police for using excessive force claiming that they were innocent victims.

He revealed that eight faithfuls lost their lives including a mother and a child who were knocked down by a speeding vehicle. Police are yet to confirm his allegations.

On Wednesday morning, terrified pilgrims who spent the night in the cold in the hill hurriedly left the area with some travelling as far back as Tanzania.