Home of another investigative journalist in Russia raided 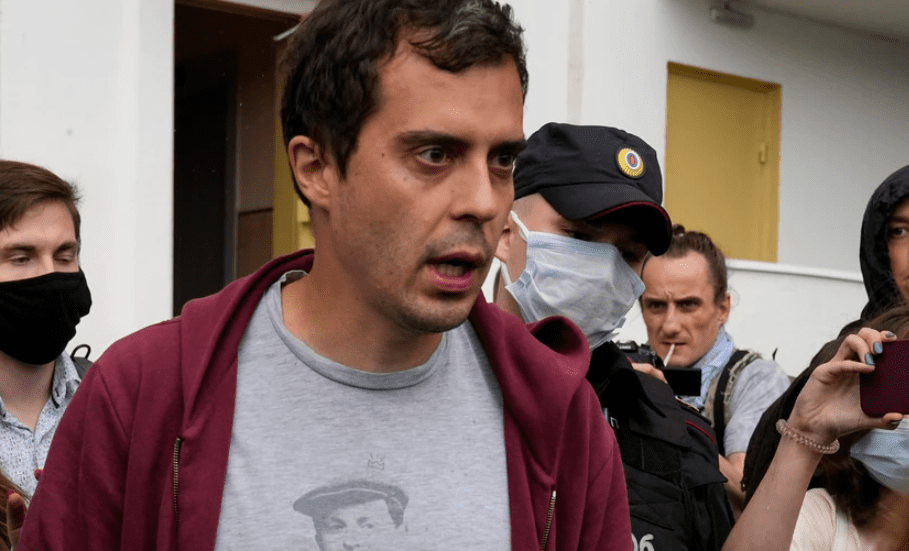 Police in Russia raided the home of the chief editor of an investigative media outlet that was recently designated as a “foreign agent,” the latest move by authorities to raise pressure on independent media before the country’s September parliamentary election.

The Insider news site chief editor Roman Dobrokhotov tweeted Wednesday morning that “police are knocking” on the door of his apartment, and his wife reported the raid to the OVD-Info legal aid group before her phone became unavailable.

A lawyer from another legal aid group, Pravozashchita Otkrytki, headed to Dobrokhotov’s apartment. The group said police seized cellphones, laptops and tablets during the raid, as well as Dobrokhotov’s international passport.

Sergei Yezhov, a journalist with The Insider, said that Dobrokhotov was supposed to leave Russia on Wednesday.

Russian opposition supporters, independent journalists and human rights activists have faced increased government pressure ahead of September’s voting, which is widely seen as an important part of President Vladimir Putin’s efforts to cement his rule before a 2024 presidential election.

The 68-year-old Russian leader, who has been in power for more than two decades, pushed through constitutional changes last year that would potentially allow him to hold onto power until 2036.

In recent months, the government has designated several independent media outlets and journalists as “foreign agents” — a label that implies additional government scrutiny and carries strong pejorative connotations that could discredit the recipients.

The targeted outlets include VTimes and Meduza. VTimes subsequently shut down, citing the loss of advertisers, and Meduza launched a crowd-funding campaign after encountering the same problem.

The Insider was the latest addition to the list. The news outlet, which is registered in Latvia, has worked with the investigative group Bellingcat to investigate high-profile cases, such as the nerve agent poisonings of former Russian spy Sergei Sripal and Russian opposition leader Alexei Navalny.
The Russian Justice Ministry acted under a law that is used to designate as foreign agents non-governmental organizations, media outlets and individuals who receive foreign funding and engage in activities loosely described as political.

In comments to the media, Dobrokhotov has said The Insider would continue to operate as usual, in accordance with Latvian laws, and would not comply with the requirements of the foreign agents law.

Russia used the law to levy heavy fines on U.S.-funded broadcaster Radio Free Europe/Radio Liberty for failing to identify its material as produced by foreign agents. The broadcaster has asked the European Court of Human Rights to intervene.

According to The Insider, the searches targeting Dobrokhotov may be related to a slander case launched in April following a complaint by a Dutch blogger.

The Insider accused Max van der Werff of working with Russian intelligence and military services to spread false information challenging the findings of the official investigation of the downing of the Malaysia Airlines Flight 17 over eastern Ukraine.

Pravozashchita Otkrytki said Dobrokhotov was a witness in a criminal case against “unidentified persons” on the charges of slander, launched over a tweet in Dobrokhotov’s account that contains “disinformation about the downed Boeing MH17.”

The move comes just a month after a court in Moscow outlawed Navalny’s political infrastructure — his Foundation for Fighting Corruption and a network of regional offices — as extremist in a ruling that prevents people associated with the organizations from seeking public office and exposes them to lengthy prison terms.

Navalny, Putin’s fiercest political foe, was arrested in January upon returning from Germany, where he spent five months recovering from a nerve agent poisoning that he blames on the Kremlin — an accusation rejected by Russian officials.

In February, the politician was ordered to serve 2½ years in prison for violating the terms of a suspended sentence from a 2014 embezzlement conviction that he dismissed as politically motivated.

His arrest and jailing sparked a wave of mass protests across Russia’s 11 time zones, in what appeared to be a major challenge to the Kremlin. The authorities responded with mass arrests of demonstrators and criminal probes against Navalny’s closest associates.

On Wednesday, Lyubov Sobol, a top ally of Navalny and one of the few in his team who hasn’t left Russia despite being prosecuted on a number of charges, said that Russia’s state communications watchdog Roskomnadzor demanded Twitter to take down her account.

Sobol tweeted screenshots of a letter she received from Twitter, notifying her of the authorities’ request to block her account as containing “propaganda of activities” of Navalny’s organizations that have been declared extremist.

“What is it, if not the Kremlin’s hysteria ahead of the election?” Sobol wrote. It wasn’t immediately clear whether the platform would comply with the request.