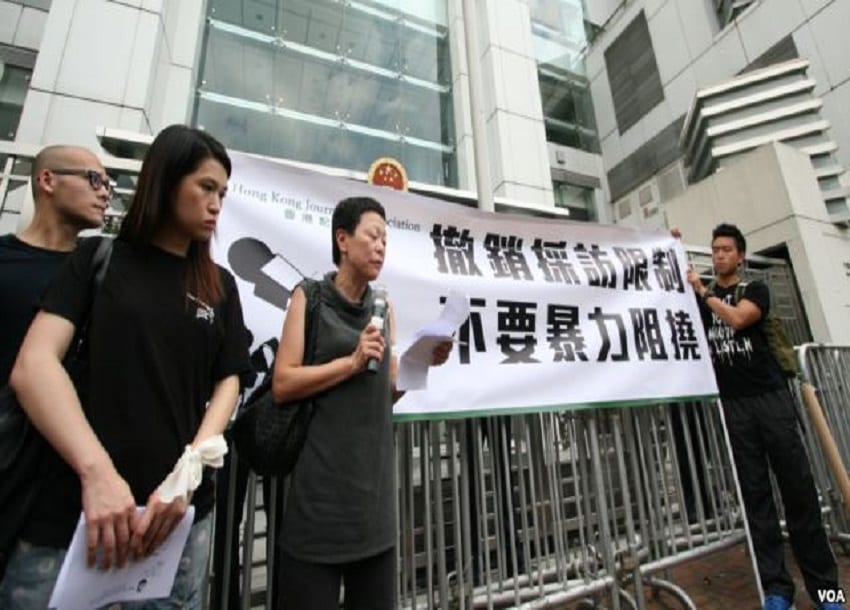 The group demanded the immediate release of publisher Wang Jianmin and editor Guo Zhongxiao, who have already been detained for more than two years and have pleaded guilty.

Meanwhile, Hong Kong police confirmed that mainland police never notified them of the cross-border arrests that led to this week’s dual sentencing in China’s Guangdong province. U.S. State Department officials say China has denied repeated requests to visit Wang, an American citizen, but they will continue pressing the matter.

After being detained for more than two years, the two men were sentenced for illegal business operations and other crimes by a district court.

The time the two men have already spent in custody will reduce the prison time ordered for them, so Guo is expected to be freed soon.

Wang and Guo said they would not appeal, although their lawyers have argued that the accusations are inconsistent with facts and that evidence was insufficient.

Wang, a permanent resident of Hong Kong, founded New Way Monthlyand Multiple Face magazines there in 2010. Both are gossipy tabloids that cover Chinese politics, including inside stories about top Communist Party officials.

In 2012, New Way Monthly reported that a top Chinese security official’s secretary might have furnished U.S. intelligence agencies with secret information. Multiple Hong Kong media critics have suggested their arrests are retaliation for that report in particular.

Guo, a Chinese mainlander, once was recognized as one of “China’s top 10 citizen reporters,” and was even awarded “new talent of the network” in 2003. He became a permanent Hong Kong resident when a Chinese-language international-affairs newsweekly, Yazhou Zhoukan (Asia Weekly), hired him in 2004.

According to the court indictment, it was after Guo joined Wang’s magazine that the two mailed copies to eight mainland readers, a move prosecutors deemed illegal. Defense attorneys answered that charge by noting the magazines were published in Hong Kong and that the eight mainland recipients were not subscribers, but friends of the publisher.

The profit gained from eight mainland readers, the defense team argued, did not exceed the minimum profit required for filing an illegal business operations case.

Mainland China has intensified its suppression of political books and magazines published in Hong Kong in recent years. Yao Wentian, the 73-year-old head of Chen Zhong Publishing house, was arrested in Shenzhen in October 2013 and accused of smuggling chemicals and raw materials. He was later sentenced to 10 years in prison and fined more than $37,000 in May 2014.

For many years, Yao had published books banned books by the Chinese Communist Party (CCP). Before his arrest, Yao was preparing to publishChinese Godfather Xi Jinping, the latest book by Chinese dissident writer Yu Jie, who has since emigrated to the United States.

The CCP’s list of banned Yao books also include Yu’s Hu Jintao satire,Emperor of the River Crabs, Zhang Boli’s Escape from China: The Long Journey From Tiananmen to Freedom, and Feng Congde’s A Tiananmen Journal: Republic on the Square.

While Yao’s 20-year record of publishing materials deemed inappropriate by Communist Party brass made him a political target, Wang and Guo, one analyst says, have now assumed his mantle.

“The case of Wang and Guo, and the cases of Causeway Bay Books and Yao, they are all in the same strain,” said Bruce Lui, a journalism scholar at Hong Kong Baptist University, adding that this week’s dual sentencing is just one way that Communist Party leaders can “clear away sources.”

“The aim of clearing away sources is to arrest all the people and to destroy the operating institutions,” he told VOA Mandarin. “We can see that after these three cases occurred, they are entirely destroyed.”

Other purveyors of dissident literature and edgy political tabloids, Lui suggested, are not so fortunate as to have a public trial. In 2015, five Hong Kong booksellers disappeared for months before eventually appearing on state television to state that they voluntarily traveled to the mainland to confess their wrongdoings.

Shortly after the disappearance of Lee Bo, a Hong Kong-based bookseller who held a British passport, various credentials — including his Home Return Permit — were found at his home, leading many to suspect Chinese police of carrying out cross-border arrests in violation of the “one country, two systems” policy.

Another released bookseller, Lam Wing-kee, said he was detained while on his way to visit friend on the mainland, and that his televised confessions were coerced. Lam also said Chinese police are still researching a list of mainland Chinese citizens who have ordered cross-border deliveries of the banned literature.