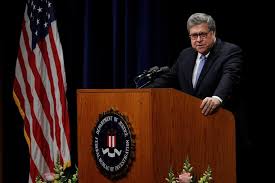 The U.S. House of Representatives Oversight Committee plans to vote on Wednesday on whether to hold Attorney General William Barr and Commerce Secretary Wilbur Ross in contempt of Congress for stonewalling a probe into an alleged scheme to politicize the 2020 U.S. Census.

“Both Secretary Ross and Attorney General Barr are refusing to comply with duly authorized subpoenas from Congress,” the committee’s chairman, Democratic Representative Elijah Cummings, said on Monday in a statement announcing the vote.

“Because they are in contempt of Congress, on Wednesday, the Committee will vote to move forward to enforce our bipartisan subpoenas,” he said.

In a statement, Ross called the planned vote an “empty stunt” and said he had cooperated with the committee, providing 14,000 pages of documents and testifying for nearly seven hours.

If the committee finds them in contempt, a vote could then take place in the full, Democratic-led House. If the full House votes in favor of contempt, it could take Ross and Barr to court to seek compliance.

The committee is investigating a plan by President Donald Trump’s administration to add a question on citizenship to next year’s U.S. Census questionnaire.

Critics believe including the question will scare immigrants and Latinos into abstaining from the survey, which is taken every 10 years. That could disproportionately undercount Democratic-leaning states, they argue.

Ross has said the citizenship question would help enforce the Voting Rights Act, which requires a tally of citizens of voting age to protect minorities against discrimination.

The panel’s Democrats said they scheduled the contempt vote after both Ross and Barr did not produce documents about the issue in response to a bipartisan subpoena the panel issued more than two months ago.

The committee said Ross testified that he added the citizenship question “solely” at the request of the Justice Department.

The panel said documents showed, however, that Ross “began a secret campaign” to add the question to the census questionnaire shortly after taking office and months before being asked to do so by the Justice Department.

The Justice Department did not immediately respond to a request for comment on the committee’s move to schedule a contempt vote.