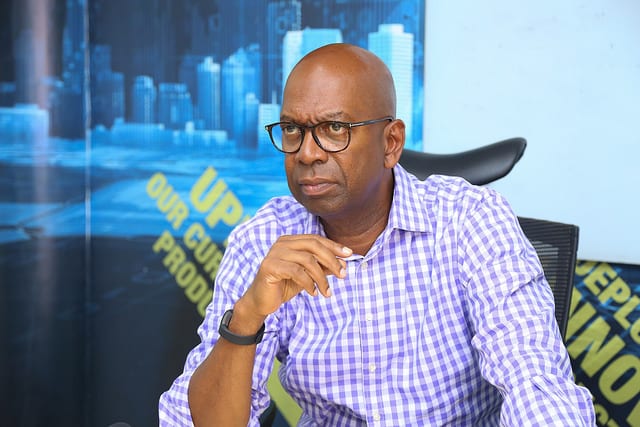 The first time Safaricom Chief Executive Officer Bob Collymore went to a doctor after falling ill, he was initially told that it was a case of Vitamin D deficiency.

The 61-year-old succumbed to Acute Myeloid Leukemia (AML) at his home in the wee hours of the morning, leaving behind a wife and four children.

Collymore’s death comes almost a year after he openly spoke out about his illness on Citizen TV’s Jeff Koinange Live.

The Safaricom boss, then coming back to Kenya after a 9-month absence, revealed chilling details of how he was initially misdiagnosed with Vitamin D deficiency instead of AML; the disease that would finally claim his life.

Speaking during the August 8, 2018 interview, he narrated how he fell ill and it took a long time before doctors realised he had a serious medical condition.

“I had been feeling unwell for a while, tired and with high temperatures from time to time; it got so bad that I could not make it to company events,” he said on the JKL show.

However, Collymore said he didn’t think much of it because the high temperatures would not last very long and he would be feeling better within a short while.

During a visit to Morocco, Collymore said he started experiencing flu-like symptoms, his body would start shaking and had severe pain in the shin; the bones at the front of the leg below the knee.

“I thought to myself it’s not something you experience unless you kick something really hard,” he said.

He then called his wife to tell her what he was feeling and she suspected that he had malaria as his symptoms seemed similar to that caused by the mosquito-borne disease.

However, when he returned to Nairobi and went to get checked, he was told he had Vitamin D deficiency and was given supplements.

Collymore said he was not satisfied with the diagnosis and decided to seek a second opinion from Dr. David Silverstein at the Nairobi Hospital.

This was the first time that Collymore said he had ever been admitted to hospital and the first test they did involved removing bone marrow from his body and testing it.

It is at this point that Dr. Silverstein told him that the problem could be with this blood and since he was not an expert on such issues, he referred him to a specialist in the United Kingdom.

This was back in 2017 and with the Kenyan elections coming up and his company’s end-year events, he told the doctor that he would oblige after he discharged his duties.

However, Dr. Silverstein was adamant that Collymore should leave the country that very night.

He left for London and it is there that a hematologist diagnosed him with AML: a type of cancer that starts in the blood-forming cells of the bone marrow.

He came back home and went back to work, even had his tenure extended by a year, until his death.