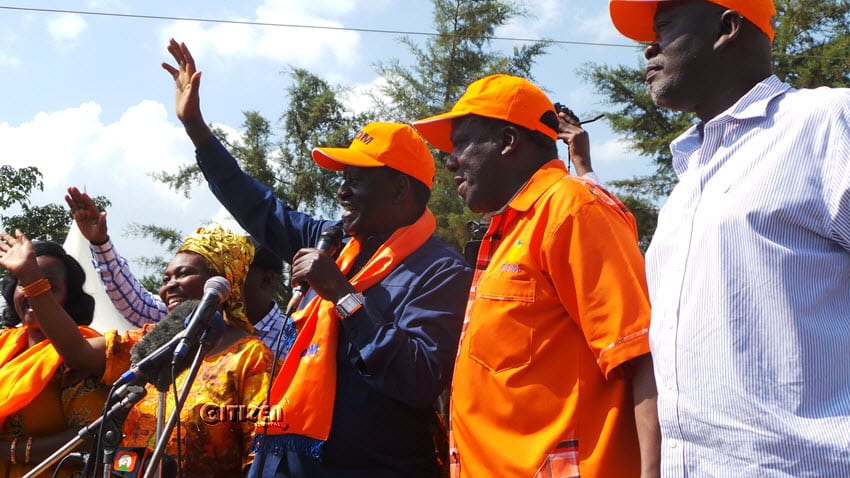 ODM leader Raila Odinga has defended himself against allegations by a section of legislators from Western Kenya that he had done nothing for the region.

Addressing supporters at a rally in Chavakali on Monday, Odinga said that he had initiated several programmes in the region including construction of several roads during his time as Minister for Roads.

The Coalition for Reforms and Democracy (CORD) leader further said that he had appointed leaders from the region into Cabinet during his time as Prime Minister in the Grand Coalition government which he led alongside former President Mwai Kibaki.

He stated that he was responsible for the appointment of Musalia Mudavadi as Deputy Prime Minister, Ababu Namwamba as Sports Minister, Paul Otuoma as Minister for Fisheries Development, as well as Kenneth Marende as Speaker of the 10th Parliament and Nancy Baraza as Deputy Chief Justice among others.

“Those saying I have not done anything for Western region are lying to the country. I did a lot for this region than Jubilee has,” said Odinga.

He further stated that if elected President in 2017, he would continue with the projects he had initiated to ensure eradication of poverty and improvement of lives.

Mbadi, who is also Suba MP, said the region enjoyed more elective positions during Odinga’s time as PM than his Nyanza backyard.

He called on the Luhya community to unite and support ODM in the 2017 polls.

Oparanya, in his address, said a Raila government would ensure development for Western.

The Kakamega Governor noted that anti-Odinga remarks by Budalang’i MP Ababu Namwamba and other disgruntled legislators are not a representation of the region saying only Odinga has a chance to defeat President Uhuru Kenyatta in 2017.