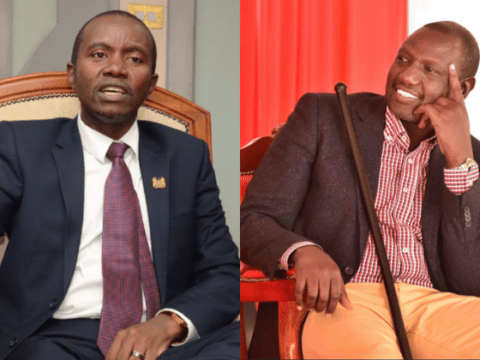 In thinly veiled salvos, and what now becomes the first direct response to the DP’s politics from inside the cabinet, the CS accused Ruto of misleading young people with empty promises.

CS Mucheru, who was attending a youth event of the National Council of Churches (NCCK), also criticised the recent Court of Appeal decision on the Building Bridges Initiative (BBI).

“We have heard some people promising you analogue solutions as part of a new economic blueprint to bring you prosperity. I am a student of economics and I do not see how the successful economic uplifting of our people can be carried on with outdated solutions. We can and must do better than this,” he said.

Though he never mentioned the DP by name, CS Mucheru’s unusually bare-knuckled tackle also targeted the churches, which he accused of allowing the pulpits to be used as political platforms.

“These churches have been silenced by massive donations from politicians, who have then been gifted with the pulpit to preach the gospel some times of division and nudge citizens towards a class war. These Bible-waving politicians have especially targeted the youth because they think, wrongly, that youth are gullible and easy to manipulate,” said the CS.

Mucheru, who spoke as he opened the National Youth Conference in Limuru sponsored by the National Council of Churches of Kenya, urged the church to stand and be counted.

“Do not be led down the garden path. Do not be lied to. You must expose these peddlers for who they are; snake oil salesmen who will go to any extent to gain political power. You must see beyond the smokescreen and unmask these people who are out to take advantage of you,” he added.

But the deputy president who spoke in Naivasha appeared to downplay the attack.

“I do not wish to respond to those who are criticising what we’re doing because we believe that criticism is not entirely a bad thing, at least they’re recognising that we’re having a conversation, which is good enough,” said DP Ruto.

CS Mucheru said the government has already put in place many initiatives aimed at the country’s youth.

“My ministry is responsible for ensuring that, among other things, the youth are equipped, empowered, involved, and protected with the aim of making them self-reliant and creators of jobs not just consumers of jobs,” he noted.

Mucheru’s comments came in the wake of renewed political activity in the country following the collapse of the Building Bridges Initiative (BBI) at the Court of Appeal.

He accused the seven-judge bench of allegedly usurping the power of the people.

“…we saw some leaders fervently thanking God the Father for the adverse court ruling. It is a classic case of not seeing the forest for the trees. The whole issue was politicised and anchored as a power hunt, rather than a noble development initiative that would devolve more funds to the people,” said the CS.

In 2019, Mucheru was among cabinet members who had a brush with the DP over an alleged assassination plot.

The latest attack only adding to the growing rhetoric between DP Ruto and allies of President Uhuru Kenyatta.