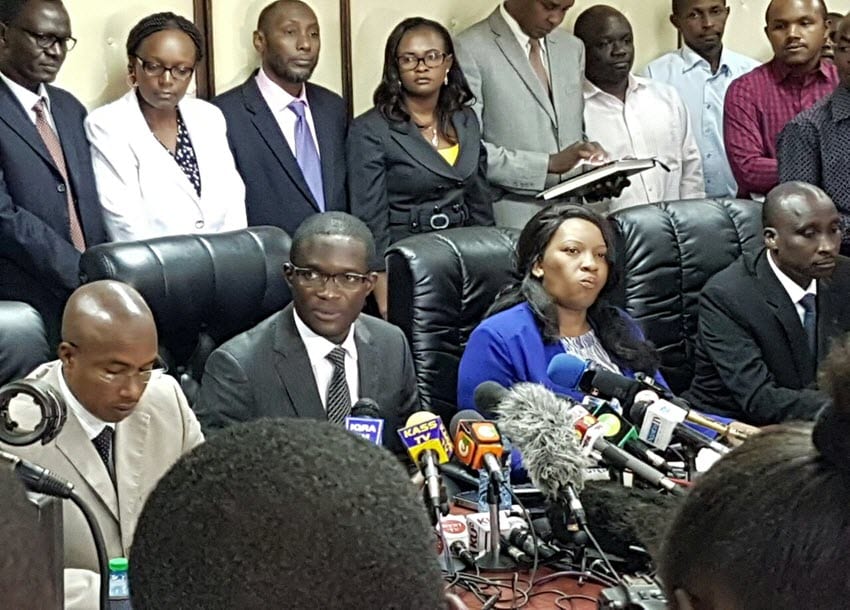 The Independent Electoral and Boundaries Commission (IEBC) on Tuesday said it has recorded 128,926 cases of double registration and shared ID numbers of registered voters in the ongoing voter listing exercise countrywide.

Addressing the press for the first time since assuming office, IEBC chairperson, Wafula Chebukati, however, said the anomalies were innocent mistakes on the part of the electoral body and attributed this to data entry errors during registration, shared National ID numbers and also mischief by voters who thought they could get away with double registration or others who thought they would not be picked out for using a single identity card.

Chebukati, however, moved to assure Kenyans that the commission is addressing the cases with the National Registration Bureau. Last week, IEBC, has also admitted that there could be data entry errors in the voter register saying that such errors occur at the point of registration or genuine sharing of National Identification Card numbers.

The electoral body, however, assured Kenyans that since voters are identified using biometric features on voting day, no legitimately registered voters can be disenfranchised due to the data entry errors. “Any person whose National ID details are inconsistent with the details captured in the biometric system such a person is never allowed to vote,” read the IEBC statement in part.

The commission further indicated that it has been in touch with the National Registration Bureau on potential National ID duplicates. The commission has since announced a voter verification exercise commencing in May for 30 days that will include biometric data verification after which the register will be subjected to public scrutiny.

IEBC Chief Executive Officer, Ezra Chiloba, urged all Kenyans to be involved in the audit of the voter register further pledging that the commission will avail the biometric kits for verification.

“Preparing the register is a legal process, we need to gather data and after the exercise we will process it through matching and de-duplication to ensure people do not appear twice,” said Chiloba.

The electoral body has so far registered 825,145 Kenyans over the last 7 days in the ongoing voter registration exercise which the commission says is 58% of voters out of a weekly target of 1.4 million voters.

According to the electoral body, Samburu recorded the lowest turnout standing at 18% contrary to Kajiado that exceeded target standing at 200% followed by Garissa at 128% and Kiambu at 105% With an overall target of six million, IEBC had indicated that for the country to achieve that target, the commission would need to register at least 200,000 new voters daily translating to 1.42 million voters a week.